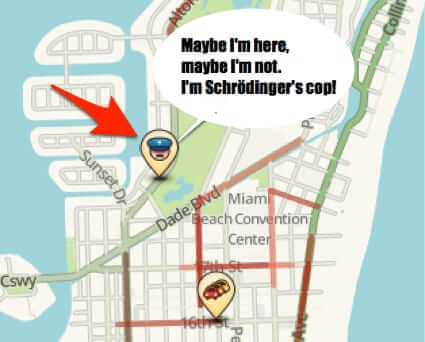 Police in Miami have launched a disinformation campaign by misreporting their own locations in the traffic app, Waze. The police say that this serves two important purposes: first, thwarting Waze’s cop-reporting function so as to not enable drivers who only drive safely when they think they would get caught driving recklessly, and second, to thwart “cop stalkers” who might otherwise show up where a police officer really is for whatever reason.

Waze is a crowd-sourced traffic information app, owned by Google, available for both the iPhone and Android phones. Waze bills iself as “the world’s largest community-based traffic and navigation app, where you can add real-time information to that of other Waze users, to “share real-time traffic and road info, saving everyone time and gas money on their daily commute.”

All of this sounds great, and it is. But it is the “I spy with my little eye, a police officer at the corner of 3rd and Main” aspect of the app that has the police up in arms, worried both about the danger of being sitting duck targets, and also how that information thwarts their speed traps.

As the Miami NBC affilliate points out, “It’s a 21st century method of drivers flashing their lights at each other to identify a speed trap.”

While last year a Federal court ruled that headlight flashing to warn of a speedtrap is legally protected speech, the Waze version allows criminals to know at a glance where there is a police officer sitting in their car.

Explains Sgt. Javier Ortiz, President of the Miami Fraternal Order of Police, “It puts us at risk, puts the public at risk, because it’s going to cause more deadly force encounters between law enforcement and suspects.” Not long ago two New York police officers were assassinated while sitting in their car, and while there is no evidence that Waze was involved in that incident, it is exactly that sort of situation that police are worried Waze will facilitate, by letting people know exactly where to find them.

And so Miami police are taking matters into their own hands – or screens – by misreporting where they are parked waiting to catch speeders.

Some police officers argue that by providing misinformation, it will counterfact the “headlight flashing effect”, making it less difficult for them to catch speeders.

But Lizzie Plaugic of the Verge disagrees. Plaugic writes that “if Waze’s maps are flooded with hundreds of police vehicles, Waze users in Miami will likely drive more carefully to avoid the vehicles — even if they aren’t really there.”

Frankly, we don’t see a problem with that – in fact we consider it a positive effect.

Waze spokesperson Julie Mossler agrees. “Most users tend to drive more carefully when they believe law enforcement is nearby.”

Nothing wrong with that.