Facebook recently made it so that when someone comments on one of your posts, the friends of that commenter will see that comment, and your post, even if they are not friends with you. And, they can comment on that post of yours, even though they are not friends with you*. Now, commenting on your post seems a rather friendly thing to do, so you may be tempted to send these people a friend request. After all, they came and posted on your timeline. And you have at least one friend (probably more) in common. Sending a friend request seems the neighbourly thing to do with someone who writes on your wall, and with whom you share common friends. (*This depends on your Facebook settings, but if the post is set to ‘public’, this will be the case.) 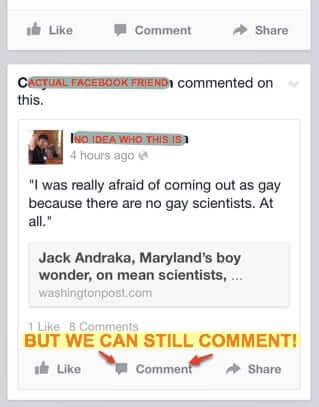 And that’s not all.

Facebook will simultaneously block you from messaging anyone with whom you are not friends.

And it gets even worse.

Look at this picture again:

How to Get Rid of the New Comment Pop-up Window on Facebook
Reposting Images on Social Media? How it Can Get You in Trouble
Facebook Learns People Use Adblockers, Changes Code to Avoid Adblockers
We Explain Why People are Saying "Tainted Meat" All Over Facebook and Twitter
Facebook's Graph Search Turns Facebook into Best Dating Site on the Internet
Site Reads and Explains Terms of Service for You
How to Turn Off Notifications for Facebook Likes and Other Reactions
Insiders Urge Facebook and Apple to Fix Toxic, Intentionally Addictive Nature of Social Media and De...