The Internet is buzzing with Oprah Winfrey’s latest snafu – tweeting how much she loves the Microsoft Surface – from her iPad. 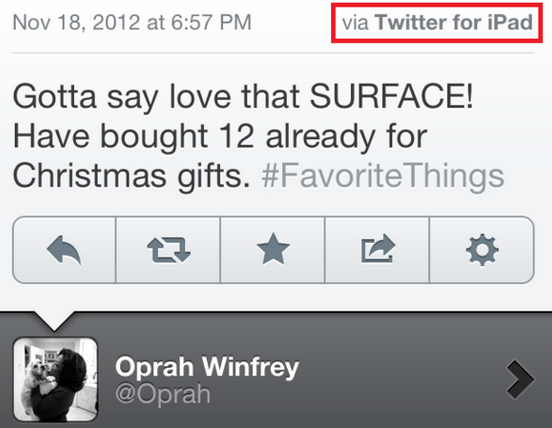 The Microsoft Surface is their version of the iPad, a tablet that offers web browsing, Microsoft Office Home, Internet Explorer 10, Windows Mail, Bing and Xbox Music. Oprah supposedly loves them so much, she’s purchased 12….just none were apparently for her. Twitter users quickly jumped on the blunder:

@DrPizza So @oprah loves @Surface enough to give to other people. Just not enough to actually use.

@ethank So Microsoft pays Oprah to shill the Surface and she tweets her endorsement from an iPad. I love media.

@srbaker @Oprah How much more would Microsoft have had to pay you to get you to post that tweet from a Surface instead of an iPad?

Of course, most are assuming that this tweet was merely a Microsoft-paid endorsement, but all are surprised that the endorsement did not come with a complimentary Surface tablet. If there were such an endorsement agreement, then Microsoft most assuredly gave Ms. Winfrey a free Surface tablet, which would make it a bigger flubbing since she would appear to be using her iPad, despite the free tablet.

Of course, most likely it was not even Oprah who posted the infamous tweet in the first place, but rather her assistant or social media manager. And as James Plafke of Geek.com points out, “The tweet being sent from an iPad doesn’t necessarily mean Oprah prefers the iPad over the Surface RT; just because you bought a Wii U doesn’t mean you’ll never use a Sony or Microsoft console ever again.”

No doubt, though, that despite the mis-tweet, the legions of rabid Oprah fans will still be stampeding to their nearest retailer to buy their own Surface.

Multi-factor Authentication and Why You Need It
How to Stop Photos (iPhoto) from Opening when You Connect Your iPhone to Your Computer
The Best Free Online PDF to Text Converter
The Best Consumer Device for Secure Calls and Text Messaging
Urgent Microsoft Vulnerability Update Patch for All Versions of Windows
Why to Set Up Two-Factor Authentication Everywhere You Can - Here's Where
How to Have Siri Compose an Entire Email with Just One Command
Whatever Happened to Activity Monitor in Apple Mail? And How to Get it Back 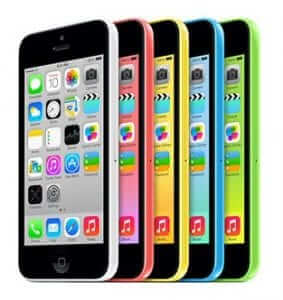