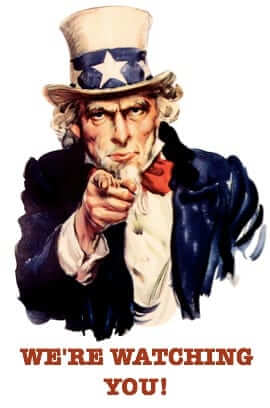 The newest reveal about the NSA’s surveillance activities is the existance of the NSA Co-Traveler program, through which the NSA is tracking the location and movements of the majority of cell phones on the planet, relationship-mapping every cell phone with every other cell phone. It does this by tapping into both U.S. and foreign cell phone networks.

According to documents released by Edward Snowden, the NSA collects billions of cell phone records

This relationship-mapping can happen incidentally or intentionally. An NSA official, who spoke with the Washington Post on condition of anonymity, explained that the “vast volumes” of data they get is derived from tapping into cables that serve mobile networks around the world, and so while not targeted, U.S. cellphones are of course part of the data mix.

“There is no element of the intelligence community that under any authority is intentionally collecting bulk cellphone location information about cellphones in the United States,” stated Robert Litt of the Office of the Director of National Intelligence.

Indeed, another NSA official was adamant that the collection methods for Co-Traveler and other such programs are “tuned to be looking outside the United States.”

Cell phones ‘announce’ their location through a variety of methods, including signing in and out of each cell tower along the route the phone is taking, and through the GPS chip that is in nearly all smart phones. If wifi is enabled, that becomes an additional source of location data.

The data collection points, known as SIGADS, can be either physical or virtual. SIGADS stands for “SIGINT Activity Designator”; in turn, SIGINT stands for “Signals Intelligence”.

Take for example the SIGAD known to the NSA as “STORMBREW”. STORMBREW collects signals intelligence (“SIGINT”) from two “corporate partners” (presumably communications carriers) known by the code names WOLFPOINT and ARTIFICE. According to reports, these are both physical (as opposed to virtual) collection systems – i.e equipment that is intercepting the SIGINT.

STORMBREW gathers data from twenty-seven different pairs of originating and destination points, each of which will identify itself with a code, known in the industry as “OPC” and “DPC” (standing for “Originating Point Code” and “Destination Point Code”, respectively).

The Point Code, also known as the Signaling System 7 (or “SS7”) code, can be thought of as analogous to an IP address on the Internet, or, even more simply, a checkpoint through which each cell phone passes, and which announces itself as it hands off the cell phone from one point to another. If you think of the cell phone as being a traveler going through various ports of call, the SS7 Point Code is similar to the stamp on the passport each time the traveler enters or leaves another country. The data associated with each Point Code includes the location of that particular cell tower.

Furthermore, Co-Traveler takes note of certain events, such as if a cell phone comes newly online just as another, nearby phone goes offline for the last time. This could suggest someone intentionally using disposable phones in an effort to be untraceable.

All of this data is stored in the NSA’s massive data repository known as FASCIA.

And while the NSA claims that they are not targeting U.S. citizens, the data for any U.S. cell phone can’t help but to get caught up in the collection. Even if the NSA were only monitoring foreign mobile networks, those networks play host to countless U.S. citizens who are traveling outside the U.S., and every cell phone is location-trackable to at least some extent. As Chris Soghoian with the ACLU points out, “the only way to hide your location is to disconnect from our modern communication system and live in a cave.”

As one commenter put it, “With every new revelation I become more convinced that Snowdon has done the American public a tremendous service.”

Snowden, whose last known location was Russia, where according to his attorney he has a job working for a Russian website, was just voted the Guardian’s Person of the Year for 2013.

And for an example of a company in the business of providing systems that track by location, see Proximus’ Mirage Cellular Phones Tracking Platform.

Turn Off Those Pesky iMessage Notifications!
Technology Helping in the Fight Against The Coronavirus
Bitcoins ("BTC") and Bitcoin Mining Explained in Plain English
Sony Releases The Interview Movie: Here's Where You Can Watch The Interview
Samsung Advises that Smart TV NOT Always Listening and Sharing Everything
ISIS Calls Anonymous 'Idiots' as Anonymous Declares War on ISIS
5G: The Next-Generation Network of the Future Explained
Twitter Allows Employees to Work from Home Indefinitely
Share the knowledge

Number of people who have enjoyed this article: 2,822