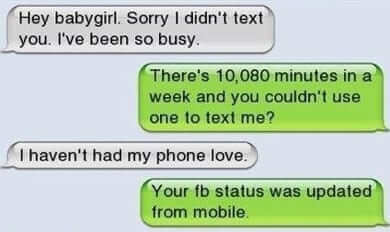 According to the BroApp website, “BroApp is your clever relationship wingman. Select your girlfriend’s number, create some sweet messages, and set the time of day when you want those messages sent. BroApp takes care of the rest.”

Say Australian creators Tom and James, “We created a demo BroApp (we didn’t even have a name for it at the time!), just for our use, that sent a single daily check-in message.”

The way that it works is pretty simple; after downloading the app (presently only available for Android phones, although Tom and James say that an iPhone version is in the works), you set up the automated text messages by selecting an entry from your contacts list. 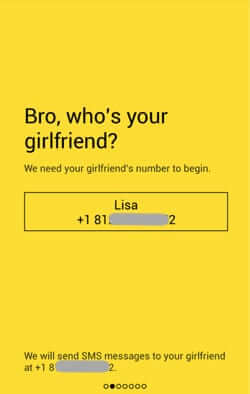 Then you set up the message that you want them to receive. We note that, especially as you can add custom messages, this would work for sending messages to boyfriends as well, or, really, anybody. Again, the novelty here is what they have wrapped around the concept of scheduled text messages. 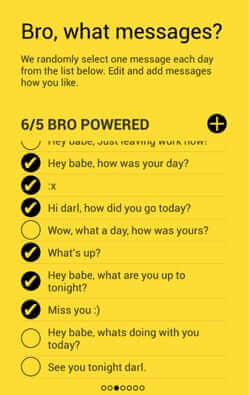 Adds Tom, “Personally, my partner was impressed that I would write her a message even though we were going to see each other that night.”

But, as one might expect, it was not without its pitfalls.

Explains Tom, “It did get awkward having to tell [his girfriend] about trialing BroApp on her for the past three months. When James and I first pitched her the idea, she said, ‘Any girl will work it out’. She was wrong.”

Way to make your girlfriend feel stupid, as well as played.

Other pitfalls personally experienced by Tom and James turned out to be having the app message your girlfriend when you are sitting right next to her at her house (fixed by adding a function to detect when girlfriend’s wifi is nearby), and functionality to not send a scheduled text if you have already been in contact within the preceding hour.

And what about for snoopy girlfriends who want to check out the BroApp on your phone?

Says the BroApp FAQ: “BroApp implements a girlfriend safety lock down. When BroApp detects an inquisitive girlfriend attempting to open BroApp on your phone, it sends that lovely lady to a list of gifts you were “planning to buy” her. Instead of her getting pissed off at your BroApp usage, she will think you’re the best boyfriend in the world.”

Until, of course, you don’t come through with those gifts.

And, even that “lock down” isn’t a sure thing, as the BroApp passcode can easily be reset simply by long-pressing three times on the BroApp icon on the lock screen. (This is plainly stated right on the BroApp website, where any reasonably resourceful girlfriend can find it.)

So, what we really want to know is, what do men and women actually think about this app? Men, would you use it? Women, would you be pissed?

Multi-factor Authentication and Why You Need It
Twitter Allows Employees to Work from Home Indefinitely
What You Need to Know about TikTok
Gmail’s Spam Problem and What You Can Do About It
NSA Mining Data from Smartphone Apps
What Actually Happened with the Iowa Primary Caucus App Explained in Plain English
Ford Life360 App Drive Mode Discourages Texting While Vehicle in Motion
Best Image to Text OCR App for the iPhone and iPad - and it's Free!
Share the knowledge

Number of people who have enjoyed this article: 1,869