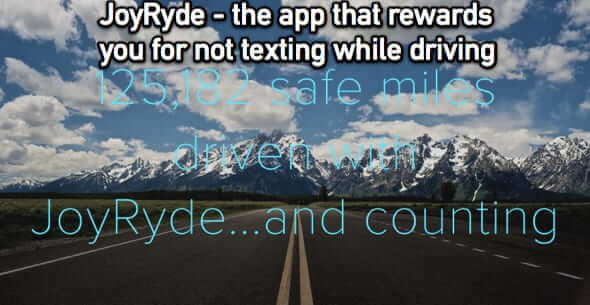 Various other solutions that have been tried include apps that text others to not text you while you’re driving, laws that allow the police to analyze your phone at the scene of an accident, and even giant billboards to shame texting drivers caught in the act, along with, of course, laws that ban texting while driving.


But none of these things seem to be working. In fact, as long ago as 2010, a study by the Highway Loss Data Institute found that laws against texting while driving do nothing to lower the incidence of people text messaging (or otherwise using their phone) while behind the wheel.

Enter JoyRyde, which was originally conceived as ‘JoyRide’ (no word on why the change, although we can imagine that it had to do with domain availability and maybe copyright concerns).

JoyRyde is the brainchild of Terry Goguen. Goguen, of Weston, Massachusetts, and a graduate of Middlebury College in Vermont, got the idea for the app after he scared himself by crossing into the middle of the road while looking at his phone behind the wheel, while driving his younger siblings home from hockey practice.

As Goguen explains on the JoyRyde site:

As the oldest of six children who all play hockey, I inherently do a lot of chauffeuring to practices. One evening, as I was driving my two little brothers home from practice, I became distracted by my phone. Before I knew it I was across the double yellow lines heading into oncoming traffic. Fortunately, I was able to swerve back into my lane with only a racing heart and shaken nerves resulting. Later that evening, my sister admitted to me that she was texting while driving when she totaled my car two months earlier. She hit a tree and was lucky to survive relatively unscathed.

Shaken by my own experience – I, like most people feel they are immune to the consequences – and well aware of the breadth of the issue, I decided to try to do something to help incentivize people to stop driving while they are distracted.

So, to incentivize people to do the right thing, rather than punishing texting while driving, Goguen developed an app where the driver is rewarded with points for miles driven without any texting event. Or, really, any other event, as part of the way that JoyRyde functions is by it remaining open on your phone while you are driving.

As Goguen points out in an interview with Vermont Public Radio, “We want to make kids want to use it. We want to make adults [use it]. Adults are sometimes the worst culprits.” {Ed. note: amen to that!} Adds Goguen, “This will allow people to want to use it and have fun while doing it. We really try and gamify it.”

Here’s how it works:

Once you install the JoyRyde app, and sign up, you simply tap on the steering wheel icon on the bottom of the JoyRyde screen to start your Ryde. 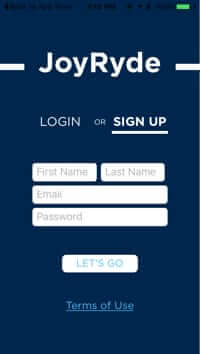 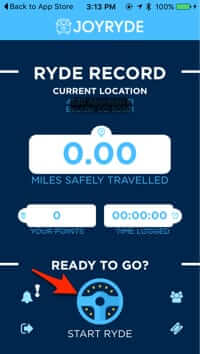 When your Ryde is done, simply tap ‘Finish Ryde’. 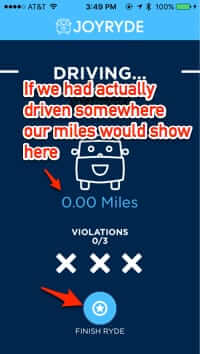 And while we wondered ‘what about passengers using it too?’, Goguen told us that “We actually encourage people to use it as a passenger. I don’t know about you, but for kids, passengers can be just as distracting on their phones, especially with the onset of SnapChat. If we can get a car full of JoyRyders, that’s the best thing we can have.” 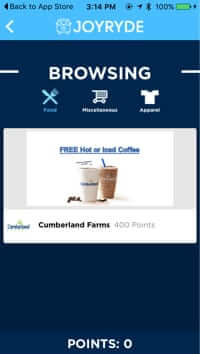 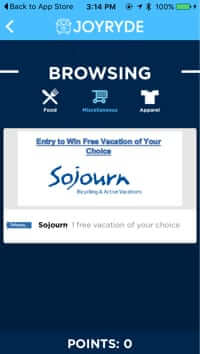 In an email to the Internet Patrol, Sojourn explained that they are happy to support JoyRyde as, as a bike tour company, road safety is really important to them. “It’s a great incentive to drive safely and be aware behind the wheel.”

And, says a spokesperson from Give’r, “Our company is founded upon the choice to Give’r in life. This means finding what you love, and what you are passionate about and then giving it your all. When we first connected with Terry, there was no question he had the fire and passion to create JoyRyde to make a difference, and make driving safer for all those around him.

We are excited to join with Terry in providing incentive for others to drive safer so they can live another day to Give’r! We will be providing giveaways and discounts for safe drivers on our full product line on www.give-r.com.”

JoyRyde founder Terry Goguen tells us that they are always on the lookout for other companies with which to pair to offer rewards for good, non-texting drivers, so if you are such a company, you can reach out to them at the JoyRyde website.

You can download the JoyRyde app for iOS here.

And you can download the JoyRyde app for Android from the Google Play store here.

How to Take a Selfie with the CamMe Selfie App
With Google Photos Ending Unlimited Storage, Here Is How to Check How Much Space You Have Left
How to Set up or Change Your Gmail Signature
The NSA is Telling Mobile Users to Turn Off Find My Phone, WiFi, and Bluetooth. Here's Why
Sexual Consent Apps Cropping Up in Wake of #Metoo Movement
Digital Driver's License Coming to Some States
How to Deal With Embarrassing Tech Mishaps When Working Remotely
Have Your Starbucks Order Waiting for You with Remote Mobile Ordering
87shares