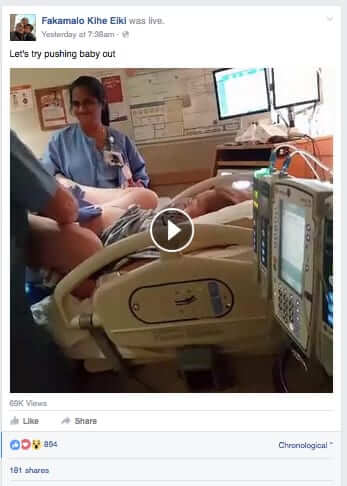 Fakamalo Kihe Eiki and his wife headed to the hospital to give birth to their son right after her water broke. And, as many fathers before him, around the world, have done, Eiki brought a camera with him. What makes their story unique is that the camera was on his smartphone, and that he livestreamed the video of the birth on Facebook.

Fakamalo Kihe Eiki livestreams the birth of his son on Facebook

Clearly his wife, and the mother of his son, was fine with it. And the congratulations (and shares of the video) have been pouring in.

But not everyone was ok with it.

And they are being vocal.

CNN’s John Ketchum opined that “This was getting out of hand.” 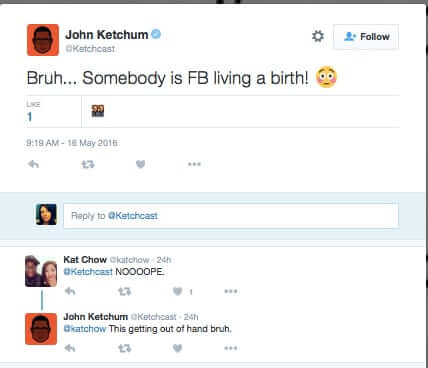 And Tram Mai, anchor at 12News in Phoenix, tweeted to her 17,000 followers, “Where do you draw the line?”, as if it personally pained the television personality that someone would do their own reporting on, you know, their news. 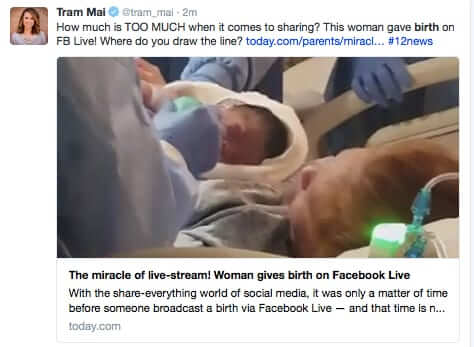 Curiously, while the BBC’s Benjamin Zand told his 14,000 followers on Twitter that “Someone just live-streamed a baby being born… This is where 25 years of the World Wide Web has taken us,” that tweet has been removed. Fortunately, in their coverage of this story, Fusion.net preserved it.

Still, far more people had favourable responses, and congratulations for the couple.

You can watch the video on Fakamalo Kihe Eiki’s Facebook page here.

How to Keep Up with All of Those Facebook Birthday Messages
We Explain Why People are Saying "Tainted Meat" All Over Facebook and Twitter
NASCAR Admits It Abused The DMCA To Get YouTube To Remove Wreck Footage Posted By Tyler Anderson
Facebook and Instagram Down on Wednesday, March 13 2019 - Facebook says "Not a DDoS"
Facebook 'Like' Button on Websites Makes Site Owners a Data Controller Under GDPR says Court
Facebook's New Dating App and Service: Everything You Need to Know Right Now
Burgler Uses Victim's Computer While in Home: You Won't Believe What He Did Next!
New Jersey Police Department in Kerfuffle Over Publishing Mug Shots on Facebook
Share the knowledge

One thought on “Man Livestreams Son’s Birth on Facebook”