We’ve heard of crowdsourcing medical diagnostics before, and it seems that the users of Reddit may be the new collective Web MD of the Internet. The friend of a Reddit user was surprised to see the pregnancy test he jokingly took come back positive. After finding an old pregnancy test in his medicine cabinet, left behind by an ex-girlfriend, he decided to pee on it. When it came back positive, he shared it with his friend, who then turned it into a rage comic and posted it on Reddit. 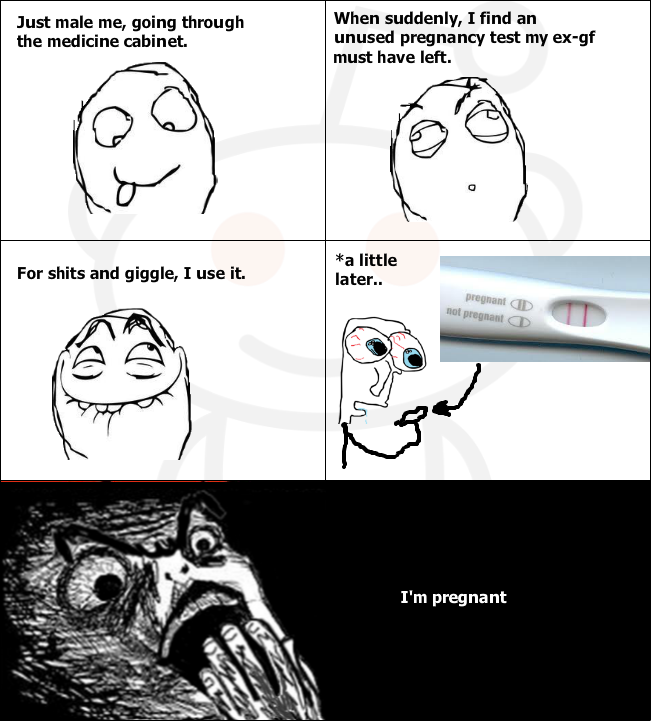 And that is when the comments began:

“Medical student here. OP should absolutely see his physician to be safe. Pregnancy tests are based on levels of human chorionic gonadotropin which is produced by the placenta, but in a male it can be elevated by testicular cancer.”

“If this is true, you should check yourself for testicular cancer. Seriously. Google it.”

“If this is true story, go see a doctor. Pregnancy test detects increased HcG level. In male around age of 30s, increased level of HcG could indicate Embryonal Carcinoma or choriocarcinoma.”

“You may have testicular cancer! Get to an oncologist, tell them you took a pregnancy test and it came out positive.”

As it turns out, the users of Reddit are not wrong: certain types of testicular cancer will cause the excretion of the same hormone that is excreted by pregnant women, Beta-HCG (human chorionic gonadotropin). It is this hormone that is picked up by a home pregnancy test, resulting in a positive reading.

It did not take long for the original poster to see the comments and comment:

“Whoa.. just saw all the cancer comments… It was my friend that did the test, I just made the comic for him.. but I am letting him know to test himself for cancer immediately. Thank you for letting me know guys, we may have dodged a bullet here!”

Before long, another announcement and rage comic was made: the man in question did, in fact, have a small cancerous tumor on one of his testicles: 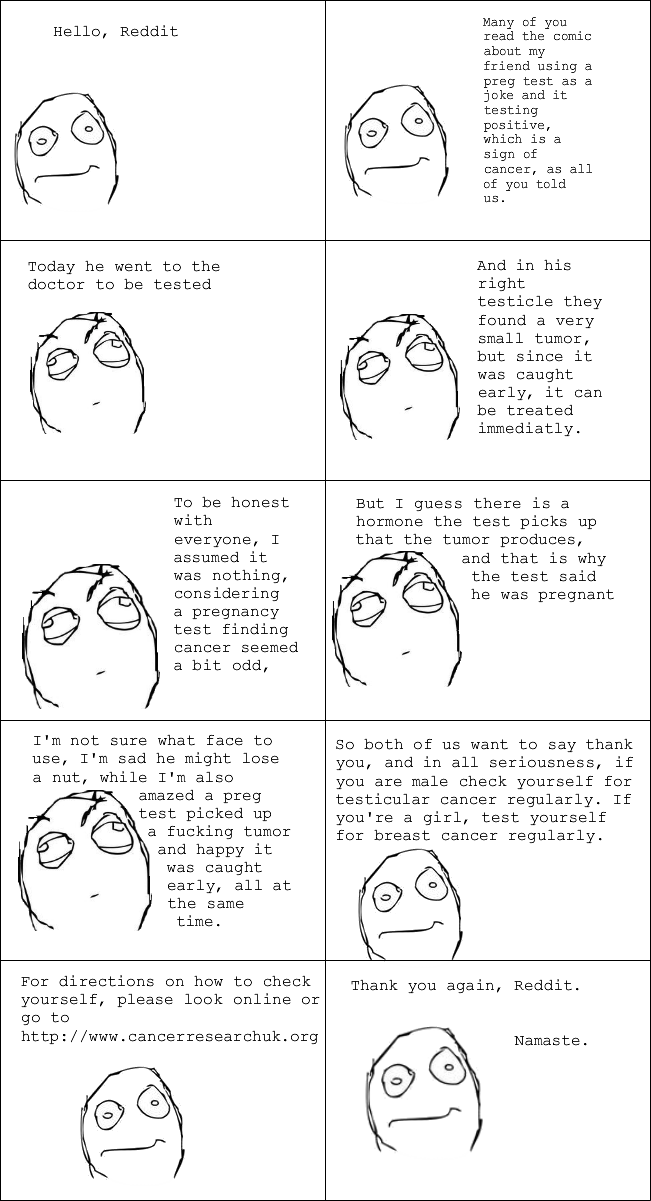 And then Reddit was alive with collective self-back patting:

And soon, there were tales of other similar stories of Reddit users posting symptoms which ended up being correctly diagnosed by the Reddit community. So moral of the story: next time you experience a new symptom and are feeling too lazy to go to the doctor, take it to Reddit (We are joking, of course).

A word of fair warning: not all types of testicular cancer produce Beta-HCG, and by the time a testicular tumor is generating enough Beta-HCG to turn a home pregnancy test positive, it can be fairly advanced. The friend of the Reddit user got very lucky that his tumor was caught early, but it is always best to do self-exams, and see a doctor regularly.

Flight Delayed or Cancelled? $19 Gets You Rebooked with No Extra Ticket Cost, No Lines, and No Hassl...
MySpace Comes Back from the Dead Fully Reanimated. New MySpace Site Includes Gorgeous Video and Eye-...
Darth Vader Posts Selfie to Instagram
How to Protect Your Digital Footprint from Prying Relatives and Friends
What is "Dark Social" Media and Does it Matter?
How to Live Life Online When You Have To
Snapchat Sued for Curating Sexually Explicit Material
Deleted Social Media Messages Tell Story About Downing of Flight MH17