Last week we told you about the Kickstarter scandal, in which the book Above the Game was allowed as a Kickstarter project. Some people called the ‘how to pick up and treat women’ book a “rape manual”, objecting to some of the advice in the book as being about ‘forcing a woman to have sex’.

On Wednesday morning Kickstarter was sent a blog post quoting disturbing material found on Reddit. The offensive material was part of a draft for a “seduction guide” that someone was using Kickstarter to publish. The posts offended a lot of people — us included — and many asked us to cancel the creator’s project. We didn’t. 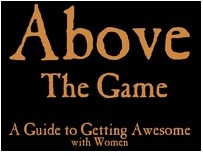 Why didn’t we cancel the project when this material was brought to our attention? Two things influenced our decision:

The decision had to be made immediately. We had only two hours from when we found out about the material to when the project was ending. We’ve never acted to remove a project that quickly.
Our processes, and everyday thinking, bias heavily toward creators. This is deeply ingrained. We feel a duty to our community — and our creators especially — to approach these investigations methodically as there is no margin for error in canceling a project. This thinking made us miss the forest for the trees.

These factors don’t excuse our decision but we hope they add clarity to how we arrived at it.

Let us be 100% clear: Content promoting or glorifying violence against women or anyone else has always been prohibited from Kickstarter. If a project page contains hateful or abusive material we don’t approve it in the first place. If we had seen this material when the project was submitted to Kickstarter (we didn’t), it never would have been approved. Kickstarter is committed to a culture of respect.

Where does this leave us?

First, there is no taking back money from the project or canceling funding after the fact. When the project was funded the backers’ money went directly from them to the creator. We missed the window.

Second, the project page has been removed from Kickstarter. The project has no place on our site. For transparency’s sake, a record of the page is cached here.

Third, we are prohibiting “seduction guides,” or anything similar, effective immediately. This material encourages misogynistic behavior and is inconsistent with our mission of funding creative works. These things do not belong on Kickstarter.

Fourth, today Kickstarter will donate $25,000 to an anti-sexual violence organization called RAINN. It’s an excellent organization that combats exactly the sort of problems our inaction may have encouraged.

We take our role as Kickstarter’s stewards very seriously. Kickstarter is one of the friendliest, most supportive places on the web and we’re committed to keeping it that way. We’re sorry for getting this so wrong.

Yes, Facebook's Data Mining is a Problem
How to Protect Your Digital Footprint from Prying Relatives and Friends
Next Gen 911 (NG911) and Swatting - How the New Next Generation 911 can be Exploited with Devastatin...
How a Meme Goes Viral, Takes on a Life of Its Own, Becomes Fake News and then Real: a Cautionary Tal...
Are the Amazon Echo, Google Home, and Siri Making People Less Polite?
Full Text of Ambassador Gordon Sondland's Prepared Testimony Before the House Intelligence, Oversigh...
Research Says that Instagram Leads Teen Girls to Feel Bad about Their Bodies and that Facebook Knows...
Cam Girls Explained
Share the knowledge

Number of people who have enjoyed this article: 1,595