It appears that Justin Bieber does not have much of a sense of humor, or at least his lawyers don’t. A popular app, Joustin Beaver, has prompted Bieber’s camp to send a cease-and-desist letter to app maker RC3, also requesting financial records pertaining to any revenue collected from the 99 cent app.

The app depicts Bieber as a plucky little beaver who is making his way down a river, trying to sign as many autographs, or “Otter-graphs,” as possible. But of course it is not that easy, because “Phot-hogs” are getting in his way and so the job of the player is to help him joust them into the river. 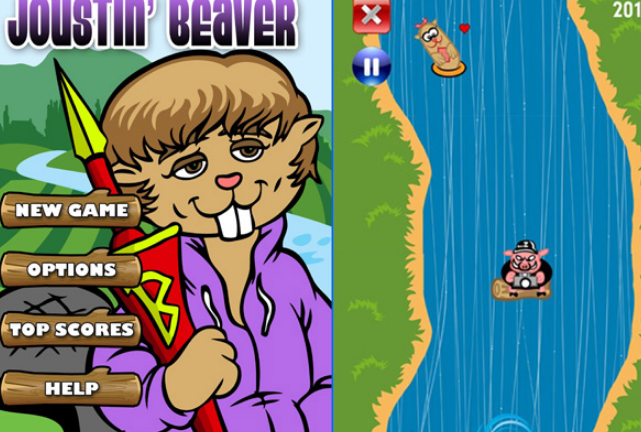 Bieber’s team is crying foul because, due to the Beaver donning Bieber’s famous shaggy haircut from his earlier years, and the name of the app, the likeness to Bieber is close enough that the pop star’s lawyers are demanding that the app be removed from iTunes all together.

The popular app has the highest rating possible at five-stars and RC3 says that it has no intentions of removing the app from the iTunes app store. They maintain that the app is a parody and that it is protected by the First Amendment. No word yet as to if RC3 plans to add a girlfriend for Joustin Beaver, Squirelina Gomez.

Control Your Car Over the Internet with the Internet Controlled Car!
How to Export Email Addresses from Your Email Program on a Mac
5 Great Apps to Get You Organized
How to Set up Your Smartphone as a Webcam
ACLU Mobile Justice App Records Police Actions as They Happen
How to Remove Contacts from Your iPhone Sharing Menu (a/k/a the "Share Sheet")
The Pros and Cons of Using the Chrome Password Manager
Facebook App Scans Sex Registry for Your Facebook Friends