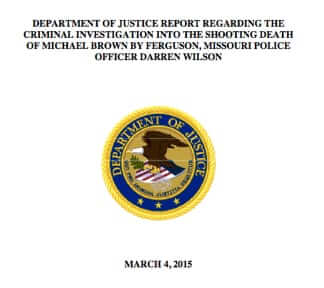 The Justice Department has released the results of its investigations into both the shooting of Michael Brown by Ferguson Police Officer Darren Wilson, and into the Ferguson Police Department itself, along with an online statement regarding its investigation into the shooting, and the atmosphere of fear and racism, in Ferguson, Missouri. Here is an overview, and links to the reports online.

In an online statement subtitled Justice Department Finds a Pattern of Civil Rights Violations by the Ferguson Police Department – a damning subtitle if ever there was one – the Department of Justice says of their investigation:


The department found that the FPD has a pattern or practice of:

Conducting stops without reasonable suspicion and arrests without probable cause in violation of the Fourth Amendment;

Interfering with the right to free expression in violation of the First Amendment; and

Using unreasonable force in violation of the Fourth Amendment.

The department found that Ferguson Municipal Court has a pattern or practice of:

Focusing on revenue over public safety, leading to court practices that violate the 14th Amendment’s due process and equal protection requirements.

Court practices exacerbating the harm of Ferguson’s unconstitutional police practices and imposing particular hardship upon Ferguson’s most vulnerable residents, especially upon those living in or near poverty.Minor offenses can generate crippling debts, result in jail time because of an inability to pay and result in the loss of a driver’s license, employment, or housing.

The department found a pattern or practice of racial bias in both the FPD and municipal court:

Ferguson’s harmful court and police practices are due, at least in part, to intentional discrimination, as demonstrated by direct evidence of racial bias and stereotyping about African Americans by certain Ferguson police and municipal court officials.

In addition, in investigating the Ferguson Police Department, the DOJ found smoking gun emails which said, among other things, that “President Barack Obama would not be
President for very long because “what black man holds a steady job for four years?”, another email that depicts the president as a chimpanzee, and an email telling the joke that “An African-American woman in New Orleans was admitted into the hospital for a pregnancy termination. Two weeks later she received a check for $5,000. She phoned the hospital to ask who it was from. The hospital said, ‘Crimestoppers’.”

Clearly the Ferguson police department hadn’t read our advice on email handling and retention policies. (Of course, they are in good (?) company, as neither had the IRS.)

You can read the Department of Justices twin reports here:

Department of Justice Report regarding the criminal investigation in the shooting death of Michael Brown by Ferguson, Missouri Police Officer Darren Wilson,

Investigation of the Ferguson Police Department

Searchable Full Text of Text Messages Produced by Ambassador Kurt Volker to the House Intelligence, ...
Police to Residents: Facebook Going Down is NOT a 911 Emergency!
Spam King Scott Richter's Bankrupt Real Big Notice to Creditors
How GDPR Will Conflict with Almost Everything
How GDPR Affects Individuals in the U.S. and Around the World Including What Rights Individuals Have...
Papyrus and American Greeting Cards Stores Put Out of Business by eCards
What Exactly is the "Right to be Forgotten"? Explanation and Full Text of Decision
The Carpenter v. United States Cell Phone Location Privacy Supreme Court Decision Explained in Plain...