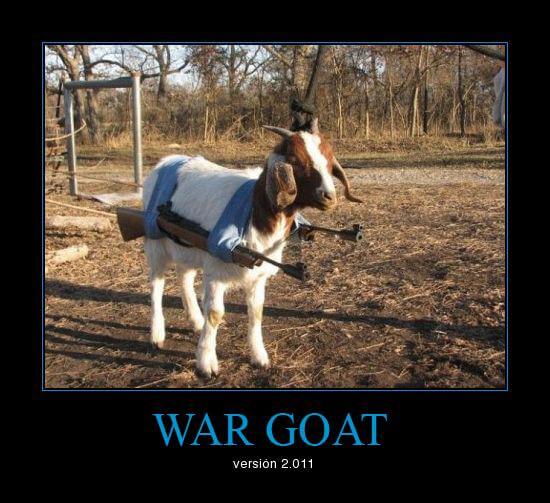 We’ve all been told not to believe everything that we read on the internet.  (The exception being this site of course!)  But after a newspaper in the UK had to run a correction about a possible human vs. goat war, maybe we shouldn’t put much stock in newspapers either.  Apparently World War Goat isn’t coming soon, or at least as far as we know. 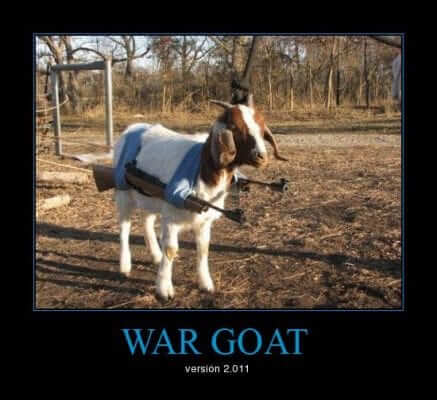 The Argus had to issue a correction after the newspaper accidentally warned readers about an upcoming war between mankind and goats.  Apparently the actual quote which the paper used was from a reader who was asking questions directed to Richard Robinson.  The paper attributed the dire warnings to Robinson himself and not to readers who were questioning him. 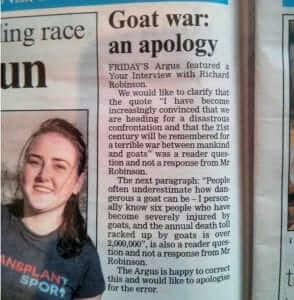 Here is the full quote that the Argus issued to correct their original warning of the oncoming goat war:

Friday’s Argus featured a Your Interview with Richard Robinson.

We would like to clarify that the quote “I have become increasingly convinced that we are heading for a disastrous confrontation and that the 21st century will be remembered for a terrible war between mankind and goats” was a reader question and not a response from Mr Robinson.

The next paragraph: People often underestimate how dangerous a goat can be – I personally know six people who have become severely injured by goats, and the annual death toll racked up by goats is over 2,000,000?, is also a reader question and not a response from Mr Robinson.

The Argus is happy to correct this and would like to apologise for the error.

While we are relieved that there doesn’t appear to be an oncoming goat war, we’re still curious where any reader might live where people are being seriously injured by goats left and right.  Also, we were curious as to how many people actually are killed by goats annually, assuming that two million people dying at the hands, err hooves, of goats each year seems a bit high.  We didn’t find our actual number of death by goats but did discover that “death by goat licking” is searched for often enough that it was a Google automatic search suggestion.

So, thank you internet, we’ll never mistrust you again.  Clearly it is newspapers that we need to be concerned about and their misleading stories about World War Goat breaking out soon.

Online Startup Plans Surprise Weekend Get-Aways for You - All You Have to do is Show Up
What is a Selfie Stick, and Do You Need One?
All About the Lawyer Cat Zoom Filter That's Taken Over the Internet - Includes Video and Transcript
Trolls Just Wanna Have Fun: Study Finds Internet Trolls are Narcissistic, Sadistic Psychopaths
Yes the .Sucks Top Level Domain is Real
Drive-Thru Lets Fast Food Customers Pay with EZ-Pass
New Bluetooth Internet Toothbrush
Potato Salad Kickstarter Explained (and We Answer Who is Potato Salad Guy Zack Danger Brown?)
Share the knowledge