The people have spoken and the iron token from the Hasbro board game Monopoly will be retired for good, being replaced by a cat. In a vote on the Monopoly Facebook page, people from 120 countries voiced their opinion, voting to keep the Scottie dog, shoe, wheelbarrow, race car, thimble, top hat and battle ship, and to get rid of the iron. The tokens proposed to replace the ousted token included a guitar, a helicopter, a diamond ring and a toy robot, but the cat was the clear winner, garnering 31% of the votes.

The iron token had a good run, having been part of the board game since the 1930s. Unfortunately with only 8% of the votes, it is the least popular of the tokens, and cat fans apparently far outweigh iron fans. Says senior vice president and global brand leader for Hasbro Gaming, Eric Nyman, “We know that cat lovers around the world will be happy to welcome the new cat token into the Monopoly game. While we’re a bit sad to see the iron go, the cat token is a fantastic choice by the fans and we have no doubt it will become just as iconic as the original tokens.” 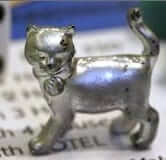 It wasn’t just individual Facebook users who weighed-in, businesses such as Purina lobbied to save the dog, Zappos.com pushed to save the shoe, and garden tool maker Ames True Temper Inc. not only rallied to save the wheelbarrow, but created videos to do so:

If you don’t have currently have a Monopoly board and are suddenly feeling nostalgic for the iron token, fear not, Hasbro is releasing a limited-edition “Golden Token” Monopoly ($17.99) board, which will be sold at Target stores, exclusively, this month. The Golden Token Monopoly will not only feature all of the current tokens, including the iron for the last time, but the five pieces proposed in the Facebook survey. All of the pieces will be gold, rather than the usual pewter.

So while we fondly welcome the new cat, we bid a sad “adieu” to the iron.

Number of people who have enjoyed this article: 3,652