Most Facebook users have said something on their Facebook pages that they regret, but probably not many like Indian citizen Shaheen Dhada, who was arrested and faced angry mob riots in India over comments she made on her Facebook timeline. Comments that many say were aimed to malign Muslims with the Shiv Sena party.

21-year-old Dhada had an opinion about the fact that Mumbai was shut down so that citizens could mourn the loss of city leader, Bal Thackeray. Thackeray, who died on November 17th, was reviled by some, but largely revered, with over 2,000,000 of his followers turning out to mourn his death.


And that just didn’t sit well with Dhada.

Said the management science graduate on a Facebook post November 18th, “Every day thousands of people die, but still the world moves on. … Today, Mumbai shuts down out of fear, not out of respect.”

Certainly Dhada’s comment was not unfounded. Thackeray, a political cartoonist in the 1960s, founded his own political party in 1966, the Shiv Sena party. Thackeray encouraged violent force to achieve party goals, which were largely against Muslims. The party reached the height of its influence in the early 90s, with riots in 1992 and 1993 that killed almost 1,000 people. In 2002 , Thackeray called to form squads of Hindu suicide bombers, before he was finally charged by the Maharashtra government for inciting enmity between different groups.

Ironically, the same exact charge was levied against Dhada.

Dhada says that mere minutes after posting her comment on Facebook, she received a phone call from a complete stranger asking, “Do you really think whatever you posted is right?'” Dhada deleted her comment off of Facebook, but it was too late. An angry mob swarmed her uncle’s medical clinic, breaking windows, vandalizing the operating room and breaking medical equipment. Within 10 minutes, police detained both Dhada for posting the comment, and her friend Renu Srinivasan for “liking” it. It may have been Dhada’s saving grace, as an angry mob quickly formed outside of the jail, but Dhada was safely tucked inside. Afraid that the mob would next come for his, Dhada’s father, Farooq Dhada, hid inside their darkened house for hours. 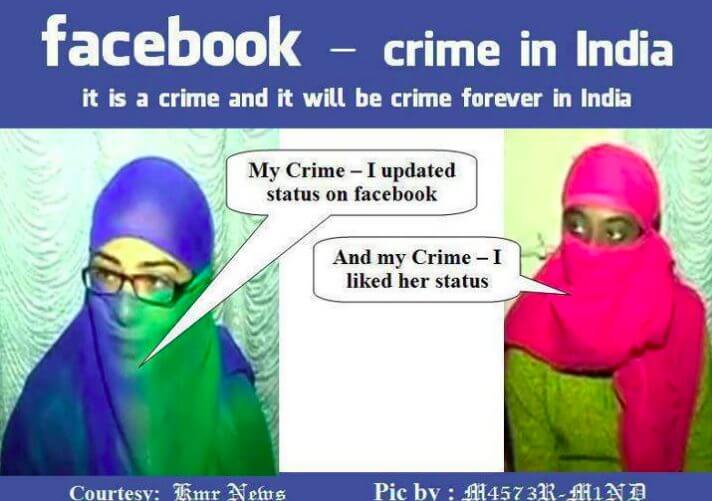 But not everyone was behind Dhada’s public persecution. As retired Supreme Court Justice Markandey Katju points out, Mumbai shutting down for a day to mourn Thackeray violates a Supreme Court ruling that it is illegal to bring a city to a standstill. Says Katju, “You can mourn a death in whichever way you want, but you can’t bring a whole city to a stoppage. So what this girl wrote was in consonance with the verdict of the Supreme Court — nothing illegal.”

So what are scrambling police officials to do when they have an angry mob, an illegal city stoppage and a girl who posted her thoughts on Facebook? Arrest her and charge her with promoting religious enmity between two groups. The same charge received by Thackeray himself in 2002. Citing in their report that she is Muslim, the charges were made that she had insulted them. Of course, Bal Thackeray was a political leader, not a religious leader.

Now the police are faced with widespread criticism for charging Dhada with a flimsy charge, simply to appease the large angry mob.

The general consensus seems to be that the police not only misapplied the law but also succumbed to the will of the mob. She was also charged with violating a section of India’s new Information Technology Act. The section, which governs electronic free speech, prohibits that speech from causing “annoyance, inconvenience, danger, obstruction, insult, injury, criminal intimidation, enmity, hatred or ill will.”

Of course, what anyone finds “annoying, inconvenient, dangerous, obstructive, insulting, injurious, criminally intimidating, enmity-inducing, hating or ill willing.” is extremely subjective and open to personal interpretation. Pranesh Prakash, director of the Centre for Internet and Society, points out that with such broad wording, most of India’s Internet users could be jailed for what they say. “I have 3,500 followers on Twitter,” says Prakash, “I’m pretty sure I annoy 100 of them on a daily basis.”

Following criticism from the public, three officials from the Palghar police station, including two senior officials and a magistrate, have received disciplinary action, and Dhada and Srinavasan will likely not be prosecuted for the crimes with which they were charged. Of course, Dhada will now likely keep future Facebook status updates to a crowd-pleasing minimum.