Frustrated trying to view your free Amazon Instant Videos with Prime on an iPad? Or, don’t have a Prime membership but you just want to view the occassional Amazon Video on your iPad? Or any other flash video? Of course, the reason that you can’t view Amazon videos on your iPad is because the iPad’s native browser, Safari, doesn’t support flash (in fact, the iPad doesn’t support flash at all). BUT! There is an easy way around this, that will allow you to view all Amazon Instant Videos, and it doesn’t require jailbreaking your iPad, or anything devious or underhanded! Read on!

First, to demonstrate that we really mean that it’s possible (and easy), here is a screen shot of one of our favourite Amazon Instant Video offerings, Glee, showing on our iPad. You

So, how are we doing it?

The secret is a different browser, available as an app through the app store, called Photon.

(You can buy Photon here at the App Store.)

The way that Photon achieves this magic is that it is running a system that translates Flash-based media to non-Flash up in the cloud. So, as you are watching the video on your iPad, Photon is actually intercepting the Flash-based stream, and then streaming a non-Flash version back to your iPad.

And all that for only $5.99 (the cost of Photon through the app store).

When you install Photon, you use it just like any other browser, so you can use it instead of Safari on your iPad, or you can use it only to watch Flash videos and continue using Safari for everything else.

In order to watch a Flash video, such as the Amazon Prime videos, with Photon, all you need to do is go to the page with what you want to watch, and then click the lightening bold icon in the upper right corner: 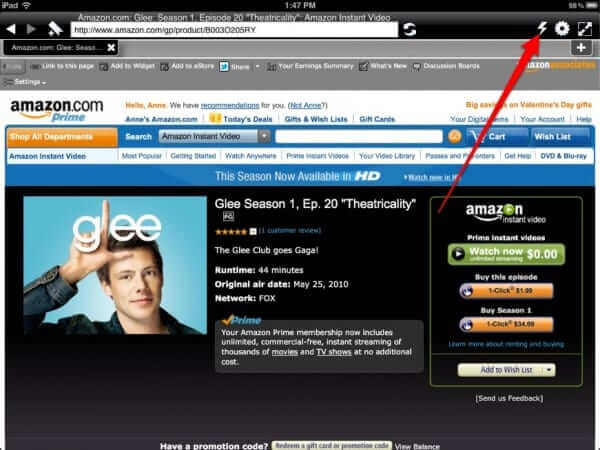 If you are already in Flash mode, then the icon will be a window with a globe instead: 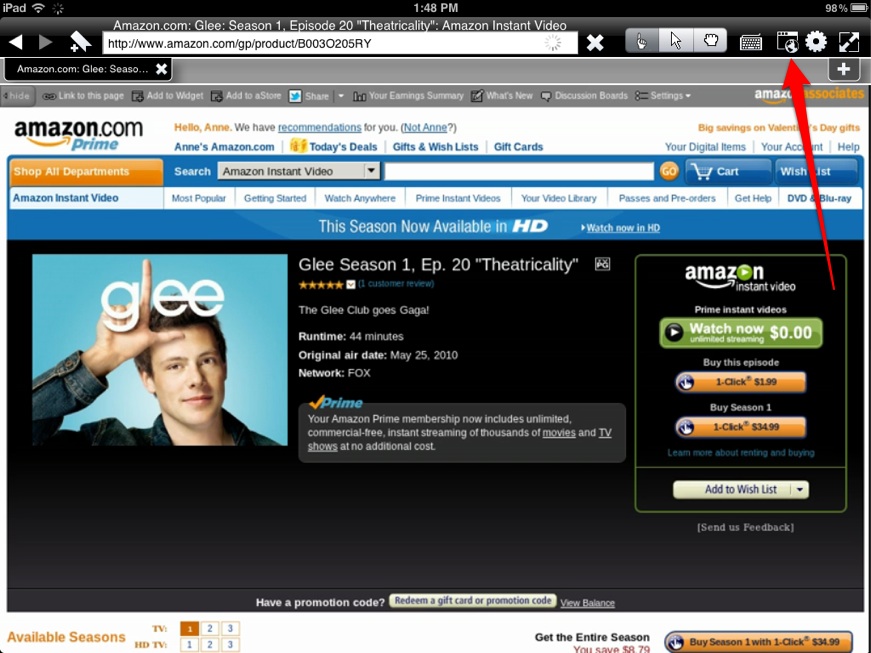 Just go into Flash mode, and that’s all there is to it. Click ‘play’ and Photon does it’s magic.

Now that you can watch Amazon Instant Videos on your iPad, here are two of our favourite television shows to watch on the iPad: Glee and The Big Bang Theory.

People also searched for how to stream prime on ios browser, is amazon prime still using flash for streaming?, why cant amazon pime movies be watched sidewaya on an ipad

All About Amazon Go: Amazon's Cashierless Convenience Store
How to Block or Otherwise Thwart or Deal with Spam Phone Calls on Your Land Line and Mobile Phone
Apple iOS 8 Debuts QuickType, Voice Messages, HomeKit and HealthKit
Unboxing and Hands On Review of the Amazon Echo Look
Hire a Goat on Amazon!
How to Disable Command-Q to Stop it from Closing Your Apps on Your Mac
Safari Opening Even Though it's Not Your Default Web Browser? Here's How to Set Your Default Web Bro...
How to Find Your Email Files on a Mac or Macbook
Share the knowledge

One thought on “How to View Flash and Amazon Prime Instant Videos on an iPad (Yes, It’s Possible!)”