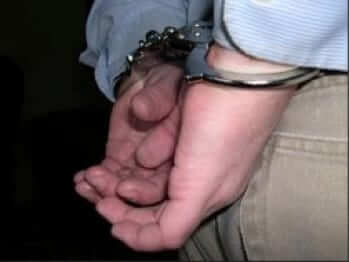 And the folks who use their camera phones for upskirting and downblousing, courting prison time in the process?

We had thought that these were the height of camera phone stupidity – especially the guy who reached out and touched someone while filming it.

The guy who sat undergoing interrogation by the police for his role in a crime involving a particular AK47 – denying hotly that he even knew what an AK47 was.. until his cell phone rang, and the police officer looked over just in time to see the screensaver which was..wait for it… a photo of the suspect holding the very AK47 in question.

Rule #1: If you are going to commit a felony, don’t take a picture of yourself with the evidence.

Rule #2: If you must take a picture of yourself with the evidence, for goodness sake, don’t put that picture in a place where people are likely to see it – like on the screen of your phone.

Rule #3: If you are so stupid as to ignore rules #1 and #2, then you are too stupid to walk free. You deserve what you get.

Then there is the guy who went in to a local cell phone store in Bakersfield, California to case the joint before robbing it. About two hours later, he came back, cut the phone lines, and in fact did rob the store, making off with the money from the till.

Fortunately, some quick-witted store employees were able to recognize him from his first visit two hours previous, during which he not only cased the joint, but dutifully filled out an application for a phone and service, in his real name, and including his address, date of birth, social security number, and California Driver’s License. Ok, so maybe it wasn’t a camera phone he was going to buy, but they do have a picture of him.

Rule #4: If you are going to rob a store, it’s a good idea to case the joint first.

Rule #5: But not to fill out an application giving them all of your true personal details.

Rule #6: Unless it’s in Bakersfield, apparently, where despite the Bakersfield police department having the suspect’s full name, address, social security number, driver’s license number, picture, and even his signature, the suspect remains at large.

Finally, to round out our quick survey of stupid camera phone tricks, a reader writes that they ran into a situation which is sure to become all too common – while we can’t confirm the authenticity of the post, the potential is certainly there regardless. That reader writes:

“Yesterday I went into a pizza restaurant to pick up an order that I had called in. I paid by using my Visa Check Card which, of course, is linked directly to my checking account. The young man behind the counter took my card, swiped it, then laid it flat on the counter as he waited for the approval, which is pretty standard procedure.

While he waited, he picked up his cell phone and started dialing. I noticed the phone because it is the same model I have, but nothing seemed out of the ordinary. Then I heard a click that sounded like my phone sounds when I take a picture. He then gave me back my card but kept the phone in his hand as if he was still pressing buttons.

Meanwhile, I’m thinking: I wonder what he is taking a picture of, oblivious to what was really going on. It then dawned on me: the only thing there was my credit card, so now I’m paying close attention to what he is doing.

He set his phone on the counter, leaving it open. About five seconds later, I heard the chime that tells you that the picture has been saved. Now I’m standing there struggling with the fact that this boy just took a picture of my credit card. Yes, he played it off well, because had we not had the same kind of phone, I probably would never have known what happened.

Needless to say, I immediately canceled that card as I was walking out of the pizza parlor. All I am saying is, be aware of your surroundings at all times. Whenever you are using your credit cards, take caution and don’t be careless. Notice who is standing near you and what they are doing when you use your card. Be aware of phones because many have a camera phone these days.”

Be smart about what you do, and about what those around you are doing.