One of the perks of getting the iPad 3G is that, in addition to the 3G, says AT&T and Apple, “you’ll have access to over 20,000 Wi-Fi hotspots, including Starbucks, Barnes and Noble, and more.” In other words, you can connect your 3G iPad, via wifi, to more than 20,000 AT&T wifi hotspots (usually named “attwifi”), at no additional charge. But how do you connect at these 20,000+ AT&T hotspots at no additional charge? How do you log into a Starbucks AT&T wifi, for example, with your iPad 3G?

In fact, as AT&T touts it, “Since iPad seamlessly switches between 3G and even faster Wi-Fi, you always get the best connection available.”

The question is, exactly how do you do it, as the above makes it sound so easy that it seems you ought to be able to walk into Starbucks, wave your iPad around, and it will magically connect.

As we found out, it’s not necessarily that easy.


Actually, there are relatively few reports of problems with some of the AT&T hotspot spots, such as Barnes and Noble, and McDonalds. Most of the problems seem to be with connecting the 3G iPad to the Starbucks AT&T wifi hotspots, so it is on those that we will focus our attention.

First, nobody – anywhere – tells you exactly how to connect your iPad 3G to a Starbucks AT&T wifi router (usually identified as “attwifi”, and in case you haven’t heard, connecting to any old router that announces itself as “attwifi” has its own risks). There are no directions on the AT&T site, nor are there directions on the Apple site, and the Starbucks site, well, has about as much on connecting an iPad as you’d expect it to (nothing).

In fact, not surprisingly, even the employees at Starbucks have no information about the deal between AT&T, 3G iPad owners, and Starbucks.

So, how do you connect your iPad 3G to the AT&T wireless at Starbucks?

Interestingly, different users have different experiences – in fact, the same user can have more than one experience. For example, we tested our 3G iPad at a Starbucks, and our iPad 3G did indeed connect seamlessly to the Starbucks AT&T wifi router.

Then it stopped connecting, and any effort to do anything other than use a browser got a connection time out error, and using a browser shunted us to the AT&T sign-in page that is supposed to be for people who are taking advantage of the two hours that their Starbucks card earns them, or for people wth AT&T DSL who have to type in their credentials to access AT&T wifi from Starbucks, but not for people with 3G iPads who were promised a seamless experience, and who don’t even have AT&T login credentials of the sort being demanded on the sign-in page.

Relatedly, and really alarming, the Starbucks AT&T wifi sign-in page was not masking passwords, and was sending passwords in the clear!

After this, we set out to determine for ourselves – and so that we could tell you – just how you are supposed to connect to the wifi at Starbucks with your iPad wifi + 3G. So we tracked down someone at AT&T, and this is what they had to say:

1. First, make sure that you have an active 3G account, meaning that you actually successfully signed up for one of the two 3G data plans that AT&T offers for your iPad 3G. (For more information about signing up for and activating your data plan, read our article, Everything You Wanted to Know About the AT&T 3G Data Plan for the iPad 3G – with Lots of Screen Shots!).

2. Assuming that you have an active 3G data plan for your iPad, try connecting to the server called “attwifi”. It should just work (after all, it’s a Mac. Then again, it’s a Mac with AT&T.) So, first, just try connecting. It may just work. (It is supposed to work!)

3. If the browser pulls up a log-in page, demanding that you provide account information, hit cancel, and see if it has connected you anyways (yes, that is the official recommendation from AT&T).

4. If you simply can’t get your 3G iPad to connect ‘seamlessly’ to the Starbucks wifi, call this number from the Starbucks, while you are having the problem, so that they can help troubleshoot it and get you going – this is the telephone number for AT&T wifi hotspot troubleshooting:

5. Please report back here with your results. 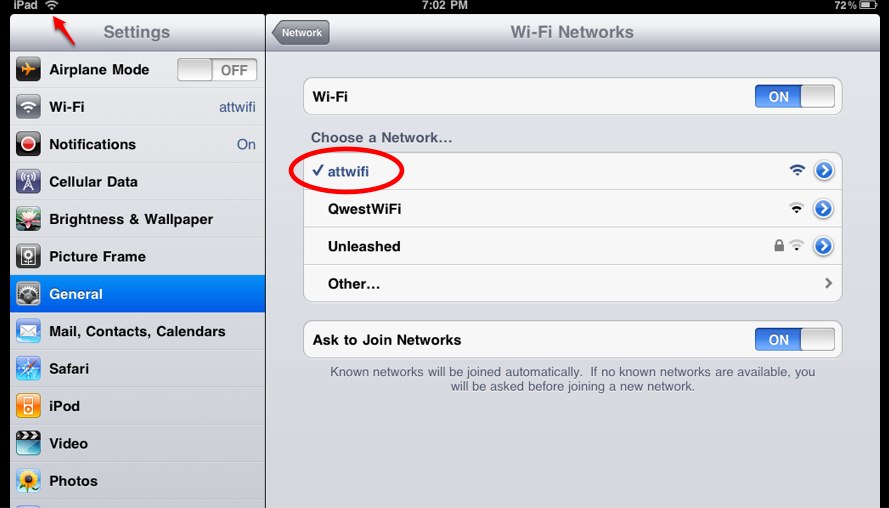 Number of people who have enjoyed this article: 13,860