As any Sidekick owner – be it Sidekick I, Sidekick II, or Sk3 – can tell you, if your Sidekick (also known as the Danger Hiptop) has been exposed to water – even if you don’t think that it has suffered water damage – it will preclude any chance of your getting your Sidekick repaired or replaced under warranty. In fact it may void the warranty outright. But how do they know?

Here, we show you pictures of the tricky traps that either Danger or Tmobile has hidden on your Sidekick to reveal to them – even if not to you – whether your Sidekick has been exposed to water.

For this article, we are focusing on the Sidekick 3 (SK3) as that is what most folks have now.

First, we start with the back. Remove the back of your SK3, and remove the battery. Holding the Sidekick upright with the back to you, look at label in the middle of the back. You’ll see your SIM card to the left of the label, and you’ll see some bar codes on the label which correspond to your IMEI and serial numbers. Now, see the circle logo in the lower right, that says “RECYCLE” on it? Good.

Now, look just to the right of that circle, and you’ll see a little white dot. It looks as if the plastic of the Sidekick’s body has had a dot punched out of it (because it has), and that white dot is the material behind it (because it is).

That dot turns red if it is exposed to water.

Now, of course, it’s entirely possible that your Sidekick could have a little water exposure along the front, and the moisture might never get past the back cover, let alone below the battery and to that moisture indicator. And if that’s the case, they’ll never know, right?

After putting your battery back in and your cover back on, we want you to take your Sidekick, and turn it over and hold it as if you were about to actually use it. Start with the screen in the closed position.

Now, peek in under the edge of that screen that is sticking up. That is to say, the part of the screen that is the bottom of the screen when it is closed, and that is now halfway to becoming the top of the screen. Scrunch your face down there and peek underneath there, and look along the upper edge of the Sidekick, just above where the ‘2’ and ‘3’ keys are.

There, do you see it? It’s a little white square.

A little white square that turns red when exposed to moisture. 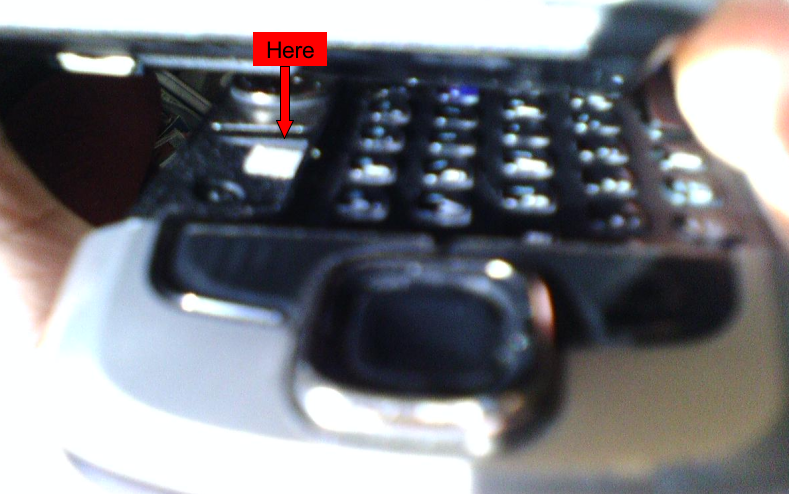 And that’s how they know.

People Who Comment on Your Facebook Posts Aren't Always Your Friends
List of Numbers that Telemarketers Use to Call You
What is Google Alphabet? It's Google's New Parent Company - But the Domain Belongs to BMW
Site Reads and Explains Terms of Service for You
Google Maps Street View Leads to Divorce
Issue with Quickbooks Can Cause Under-Reporting of 1099 Income
Paris Hilton's Sidekick's Teenaged Hacker Talks
GoDaddy's .01 Second Year GoDaddy Domain "Offer": Screw Up or Intentional Bait and Switch?
Share the knowledge