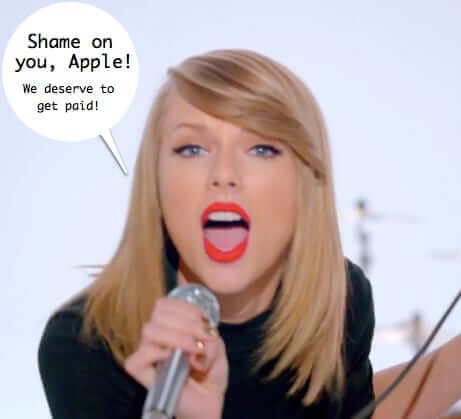 It’s a story old as time – David and Goliath, Taylor Swift and Apple. Only the slingshot that Swift used was the withholding of her music from Apple Music, Apple’s new streaming music internet radio service (as contrasted to iTunes). Here’s what’s going on and what was in her love letter to Apple.

During that three month period when new members would not be paying Apple, Apple stated that the artists would not be getting paid either – i.e. Apple would not be paying the musicians and bands royalties for their music during the free trial period. Even though it was Apple’s choice to not have customers pay for the music to which they would be listening for the first three months, and even though Apple clearly benefited from this decision (because it is a way to entice new customers, who will eventually pay).

In an [Page no longer available – we have linked to the archive.org version instead], Swift explained that she would not be releasing her new album, 1989, to Apple Music as a result of Apple’s decision to not pay artists like her for, you know, their work product, and that she found it “shocking, disappointing, and completely unlike this historically progressive and generous company.”

We have got to give huge props to Swift – her letter (full text below) was masterful in bringing the issue up while still letting Apple know that she considers them a valued partner.

Within hours, Apple Senior Vice President Eddy Cue, who, among other things, is in charge of Apple Music and the iTunes store, tweeted, in rapid succession, “Apple will always make sure that artist are paid #iTunes #AppleMusic,” and “AppleMusic will pay artist for streaming, even during customer’s free trial period,” and “We hear you @taylorswift13 and indie artists. Love, Apple.” 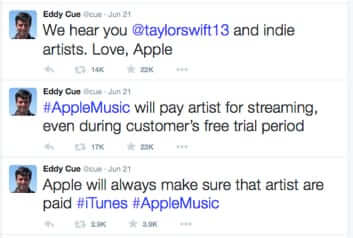 Now that Apple seems to have done the right thing, you can sign up for Apple Music here.

Here is the text of Taylor Swift’s letter to Apple – let us know what you think of it (and you can [Page no longer available – we have linked to the archive.org version instead]).

I write this to explain why I’ll be holding back my album, 1989, from the new streaming service, Apple Music. I feel this deserves an explanation because Apple has been and will continue to be one of my best partners in selling music and creating ways for me to connect with my fans. I respect the company and the truly ingenious minds that have created a legacy based on innovation and pushing the right boundaries.

I’m sure you are aware that Apple Music will be offering a free 3 month trial to anyone who signs up for the service. I’m not sure you know that Apple Music will not be paying writers, producers, or artists for those three months. I find it to be shocking, disappointing, and completely unlike this historically progressive and generous company.

This is not about me. Thankfully I am on my fifth album and can support myself, my band, crew, and entire management team by playing live shows. This is about the new artist or band that has just released their first single and will not be paid for its success. This is about the young songwriter who just got his or her first cut and thought that the royalties from that would get them out of debt. This is about the producer who works tirelessly to innovate and create, just like the innovators and creators at Apple are pioneering in their field…but will not get paid for a quarter of a year’s worth of plays on his or her songs.

These are not the complaints of a spoiled, petulant child. These are the echoed sentiments of every artist, writer and producer in my social circles who are afraid to speak up publicly because we admire and respect Apple so much. We simply do not respect this particular call.

I realize that Apple is working towards a goal of paid streaming. I think that is beautiful progress. We know how astronomically successful Apple has been and we know that this incredible company has the money to pay artists, writers and producers for the 3 month trial period… even if it is free for the fans trying it out.

Three months is a long time to go unpaid, and it is unfair to ask anyone to work for nothing. I say this with love, reverence, and admiration for everything else Apple has done. I hope that soon I can join them in the progression towards a streaming model that seems fair to those who create this music. I think this could be the platform that gets it right.

But I say to Apple with all due respect, it’s not too late to change this policy and change the minds of those in the music industry who will be deeply and gravely affected by this. We don’t ask you for free iPhones. Please don’t ask us to provide you with our music for no compensation.

Why Did My iPhone Suddenly Start Making this Weird Noise? This May be Why
Best Image to Text OCR App for the iPhone and iPad - and it's Free!
How to Use the Apple Watch as a Pedometer Without Your iPhone and No Extra Apps
How to Remove Contacts from Your iPhone Sharing Menu (a/k/a the "Share Sheet")
How to See and Access the Contents of a Winmail.dat File on Your Mac
How to Add a Mac Contact Picture without Photo Stream or Faces
Songza Dead - was New Songza App Offers Amazing Playlists of Popular Tunes, Giving Pandora a Run for...
Turn Off Those Pesky iMessage Notifications!
Share the knowledge

Number of people who have enjoyed this article: 1,756