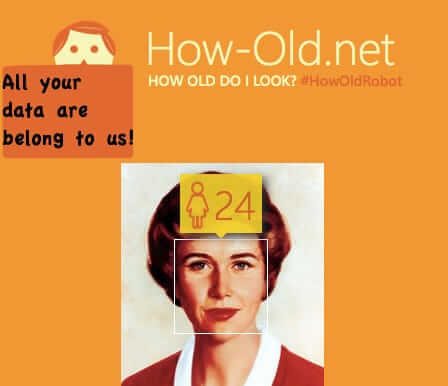 That Microsoft website that guesses your age, how-old.net (hashtag #HowOldRobot ) is actually a cleverly disguised system designed to grab your metadata from your photos. Some of the data that how-old.net has been grabbing while guessing how old you are includes your gender, your age, and your location (along with your User Agent string). Exactly the type of data they need for targeting marketing.

However, in this particular instance, Microsoft isn’t targeting the marketing to you (yet), instead the whole thing was set up to demonstrate and market some of their data capture and use capabilities to Microsoft developers.


The #HowOldRobot thinks Betty Crocker is 24 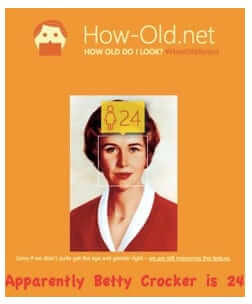 As Thompson and Balasubramanian explain, “We were building a demo for the day 2 keynote of Microsoft’s Build2015 developer conference. We wanted to showcase how developers can easily and quickly build intelligent applications using Azure services. Using our newly released Face detection API’s we set up an age guessing website called https://web.archive.org/web/20190211053005/https://www.how-old.net/ on Azure. This page lets users upload a picture and have the API predict the age and gender of any faces recognized in that picture. Now, while the API is reasonably good at locating the faces and identifying gender it isn’t particularly accurate with age, but it’s often good for a laugh and users have fun with it.”

More to the point, in the part that is important for you, the reader, Thompson and Balasubramanian explain:

“In addition to age and gender, we also used additional information provided by standard web browsers, such as the User Agent string that comes with every standard HTTP call and the latitude and longitude of location from where the picture was uploaded. These can be used to calculate standard website usage statistics such as the number of hits from iPhones, Windows or Android, or places where how-old.net is most popular.”

Now, to be fair, the How-Old.net was created for internal use. The link was sent out to an internal Microsoft group, but was apparently shared from there.

“We sent email to a group of several hundred within Microsoft asking them to try the page for a few minutes and give us feedback – optimistically hoping for a few tens of people to try it out and generate some usage data to test the demo,” explain Balasubramanian and Thompson. But, they explain, “Within hours, over 210,000 images had been submitted and we had 35000 users from all over the world (about 29k of them from Turkey, as it turned out – apparently there were a bunch of tweets from Turkey mentioning this page).”

You can read the full blog post [Page no longer available – we have linked to the archive.org version instead].

For anybody reading this who submitted a picture to How-Old.net, how, if at all, does this information change how you feel about having used it? 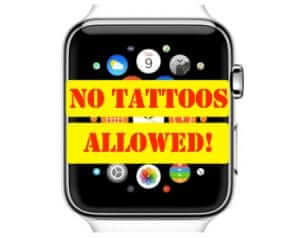 #TattooGate: Apple Watch Doesn’t Work with Tattoos (and the Work-around)