We’ve had the opportunity to be involved with the unboxing of the new Hover Passport video camera drone from Zero Zero Robot (it’s pretty darned sweet!), and so we have also had the opportunity to observe a couple of things that may happen right out of the box. The first is that the batteries seem not to be charging, which may lead you to think that the charger is defective. The second is a ‘gimbal error’ alert in the app on your phone. We’ll talk about both of these.

For those of you not yet familiar with the Hover Passport drone camera, here is how Zero Zero Robot (ZZR) describes it on their GetHover.com site.


And indeed that’s what it does, once you get it going.

Again, right out of the box our unboxer encountered two things that kept them from launching right into it after set-up: that the batteries didn’t seem to be charging, and the gimbal error.

Because this is neither a review of the Zero Zero Robot Hover Passport, nor a technical treatise, but rather you are probably reading this because you’ve encountered the gimbal error and want to know what it means and how to fix it so that you can start playing with your Passport, here’s the bottom line:

The gimbal, as Wikipedia explains it, is “a pivoted support that allows the rotation of an object about a single axis.”

In this context, it is the system that keeps your Passport upright and positioned while following you around, or hovering in place, among other things. 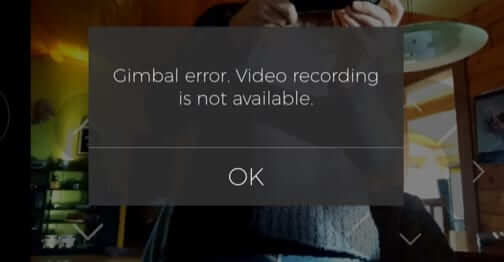 Then, check whether there are any updates to the app. You can check for app updates in your Apple or Android app store area on your phone.

Unfortunately for our unboxer, neither of these things fixed the gimbal error issue. So, on behalf of not only them, but anyone else having this issue, we have a reached out to Zero Zero Robot and will post what they have to say here, as soon as they say it.

6 thoughts on “Hover Camera Passport Gimbal Error or Batteries Won’t Charge? Here’s What May be Going On”

Number of people who have enjoyed this article: 1,213