Countless people ran to their local supermarkets and convenience stores today, to corner the market on Twinkies, Hostess cupcakes, Snoballs, and Ho Hos, as the news of American fixture Hostess Bakery announced that it would be closing after being unable to resolve a contract negotiation dispute with the Bakery, Confectionary, Tobacco Workers and Grain Millers International Union (BCTGM, or, simply, “the Bakers Union”). Pictures of empty Twinkie shelves at grocery stores started showing up on the Internet, and, at just about the same time, Twinkie’s started showing up on eBay, and through Amazon, at prices of as much as $1000 or more for a single box of Twinkies.

Hostess, which has been in financial straits for some time, was attemping to convince the various unions with which it had to work to accept pay cuts in order for it to keep its doors open, and it’s 18,500 employees employed. While most of the other unions (and in particular the Teamsters union) were willing to negotiate, the Bakers Union dug in its heels and refused, going out on strike last week.

Hostess places the blame for it having to file bankruptcy and shut its doors squarely on the Bakers Union.

Lamented Hostess CEO Greg Rayburn, “We deeply regret the necessity of today’s decision, but we do not have the financial resources to weather an extended nationwide strike. Hostess Brands will move promptly to lay off most of its 18,500-member workforce and focus on selling its assets to the highest bidders.”

The BCTGM chose a different path, as is their prerogative, to not substantively look for a solution or engage in the process. BCTGM members were told there were better solutions than the final offer, although Judge Drain stated in his decision in bankruptcy court that no such solutions exist. Without complete information, BCTGM members voted by voice votes in union halls. The BCTGM reported that over 90 percent rejected the final offer and three of its units ratified the final offer.

In any event, and regardless of who is at “fault”, within hours of the announcement, people had decended like hordes of locusts on their local Hostess retailers, picking clean the Hostess product shelves of Twinkies and, to a far lesser extent, other Hostess delights.

And listing them on eBay. 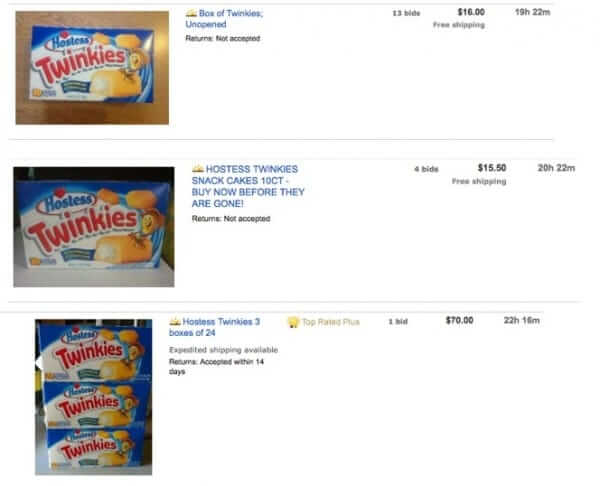 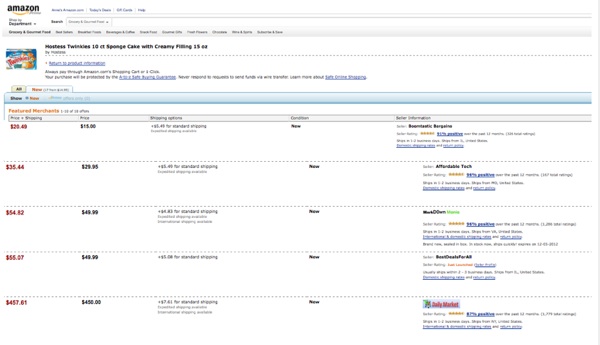 We particularly like the suggestion to get them before the Zombie apocolypse; after all, Twinkies are just about the one foodstuff that will last forever.

Amazon Opens 7 New Fulfillment Centers; Offers 'Order and Pick Up' at Whole Foods for Prime Members
Amazon Lockers Starting to Dot the Country
Just in Time for Black Friday and Cyber Monday Our Readers Share Their Top Holiday Gift Ideas
Amazon 3D Smartphone to Be Announced June 18
Is the Important eBay Password Reset Required Email Legitimate or a Scam?
Amazon Key: For When You Feel Like Letting a Stranger Into Your Home When You're Not There
Amazon Echo Recordings and Fitbit Tracking Used as Evidence in Murder Trials - Smart Devices as Witn...
Amazon Echo Invitation Goes Out with Release Date of "Several Months"
Spread the love