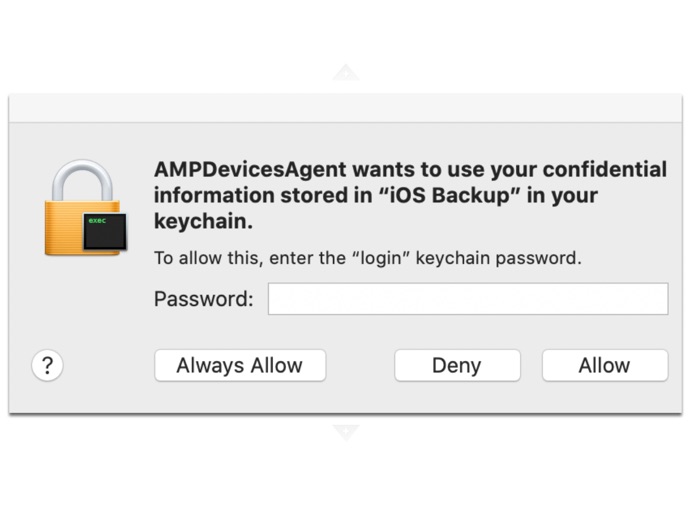 “AMPDevicesAgent wants to use your confidential information stored in iOS backup in your keychain” screams the intrusive popup, over and over no matter how many times you tell it “Deny”. Given the relative lack of information provided, and given that the scant information that is provided includes the ominous word “confidential”, of the three choices offered to satisfy the popup, which are ‘allow’ (no), ‘always allow’ (heck no), and ‘deny’ (yes, that one), that last option (‘deny’) should be your default, or even knee-jerk, reaction, especially as the other two options require you to enter your password (eek). At least until you can figure out what the heck it all means.

Even the monicker “AMPDevicesAgent” seems to make no sense. You know what an agent is (even in this context), and you certainly know what a device is (and you can infer which device because the nag is referencing iOS), but to what the heck does “AMP” refer? Isn’t it that thing that Google forced on us back in 2015? In that case AMP stood for ‘Accelerated Mobile Pages’, and was, we are told by Wikipedia, “originally created by Google as a competitor to Facebook Instant Articles and Apple News. AMP is optimized for mobile web browsing and intended to help webpages load faster. … AMP has been criticized for potentially giving further control over the web to Google and other concerns.” (Go figure.)

Anyways, according to Apple, AMPDevicesAgent is a new device manager which is used for updating, backing up, and restoring your devices. It is new to and starting with MacOS Catalina. And yes, even some people at Apple admit that they did a terrible job of alerting users to this new device manager, and that had they done a better job of it then there wouldn’t now be scores of people asking about the popup message, and wondering if it’s safe to share that ‘confidential information’.

(Fun fact: Catalina is the last version under the 10 classification (‘X’ being the Roman numeral for 10); subsequent releases are known as MacOS 11 (Big Sur, released in 2020) and MacOS 12 (Monterey, released in 2021). The first nine versions of OS X were named for big cats. It wasn’t until version eleven that it was switched to California towns, while the tenth version, “Mavericks”, was named for a popular surfing spot in the Bay area. Anyone want to guess what California town will lend its name to MacOS 13? We’re betting on Santa Cruz, Santa Barbara, Malibu, or Carmel.)

As for to what the AMP refers in the AMPDevicesAgent, nobody seems to know (well, we’re sure that someone at Apple must know, so if anyone who knows is reading this, let us in on it, please). There is a corporate “AMP” division at Apple, but it stands for Apple Media Products.

And now for the answer to the 64,000 irritation question, how to stop that damned “AMPDevicesAgent wants to use your confidential information stored in iOS backup in your keychain” nag message: click on “Always Allow” because yes, it is safe to do so, and it is what your Mac needs in order to manage, back up, and restore your iPhone or iPad.

How to Add Lyrics - All of Them! - to Your iTunes Library and Display Them with Your Music on Your i...
How to Add or Remove Background Color of Email Messages in Your Message List in Apple Mail
Allow Button not Working when App is Blocked from Loading on Mac? This May be the Problem! Plus How ...
How to Block Someone on Your iPhone and Do They Know When You Block Them?
Apple, Samsung Join CTIA Pledge Anti-Theft Kill Switch for Smartphones
#TattooGate: Apple Watch Doesn't Work with Tattoos (and the Work-around)
How to Combine Images on a Mac
How to Make an iPhone Answer Automatically on a Bluetooth Headset
Share the knowledge

Number of people who have enjoyed this article: 276