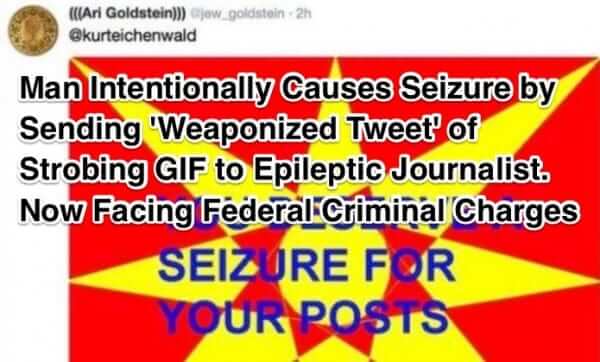 John Rayne Rivello really disagreed with much of what journalist Kurt Eichenwald had to say about Donald Trump; in fact so much so that Rivello, under the assumed name Ari Goldstein and Twitter handle ‘jew_goldstein’, intentionally induced a seizure in Eichenwald, who openly suffers from epilepsy. In what the press is now calling a ‘weaponized Tweet’, Rivello sent Eichenwald a strobing animated GIF, which caused Eichenwald to immediate suffer a seizure upon opening it. The text on the image said “You deserve a seizure for your posts.” 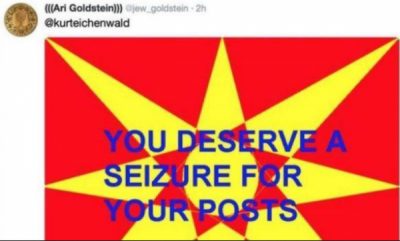 The seizure that was triggered when Eichenwald viewed the image was severe and, according to his attorney in a radio interview, could have been fatal if he had not received immediate attention. Fortunately, Eichenwald’s wife happened to walk into the room, found her husband seizing, and got help for him.

On investigation, in addition to the strobe-bearing Tweet, investigators found several direct messages (“DMs”) in Rivello’s Twitter account, saying things like “I hope this sends him into a seizure”, “I know he has epilepsy”, and “let’s see if he dies.”

Rivello is now in jail, facing Federal charges from the FBI.

According to the criminal complaint filed by the FBI earlier this month:

On or about December 15, 2016, in the Dallas Division of the Northern District of Texas and elsewhere, defendant John Rayne Rivello, with the intent to kill, injure, harass, and intimidate, did knowingly and intentionally use an interactive computer service and an electronic communication service to engage in a course of conduct that placed a person in reasonable fear of the death of and seriously bodily injury to that person and caused, attempted to cause, and would be reasonably expected to cause substantial emotional distress to that person; in that Rivello posed as Twitter user Ari Goldstein and used his Twitter account @jew_goldstein to post an Animated Graphics Interchange Format (GIF) on the victim’s Twitter feed, knowing that the victim was an epileptic and knowing that the animated GIF was a stroke bearing the message “YOU DESERVE A SEIZURE FOR YOUR POSTS.” 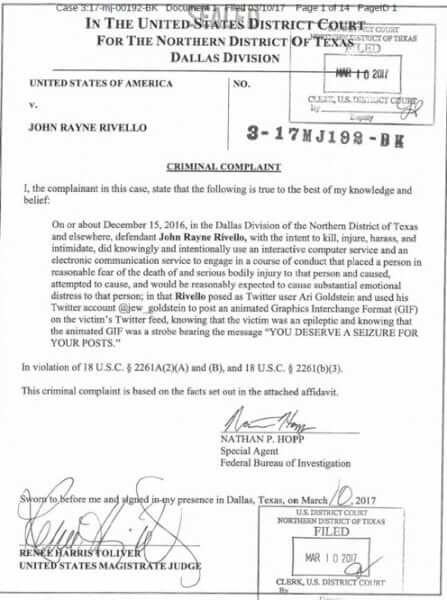 Rivello’s primary, if only, defense will likely be an appeal to the 1st Amendment – saying that the Tweet was protected free speech. However, that is like saying that sending a hate letter (arguably protected speech) in an envelope with anthrax has 1st Amendment protection (clearly not).

What’s as bad, if not worse, is that since this incident was in the news, and people have realized that it’s possible to trigger seizures by sending an animated strobing GIF, there have been 40 more such incidents.

And the FBI is investigating each of them.

Criminal Uses Google Maps to Steal Roofs Off Buildings
Snapchat Sued for Curating Sexually Explicit Material
NIFOC, BOGSAT, and 1000s More in FBI Glossary of Internet Slang Acronyms
Parking Finder Apps Let You Find or Scalp a Parking Spot
Foreigners Entering U.S. May Be Asked to Provide Facebook, Twitter and Other Social Media Account In...
What is "Dark Social" Media and Does it Matter?
Do You Still Have to Follow GDPR after Brexit if You are in the UK? Yes
Employees Hurt by Illegal Non-Poach Agreement Between Apple, Google, Intel, IBM, eBay, Microsoft, an...
Share the knowledge

Number of people who have enjoyed this article: 847