But now Moore is upping the ante, and claimed in an interview with BetaBeat that he is relaunching the site with the ability to also include the private address of the person being uploaded so that they can be mapped, allowing other users to “stalk people.” He later recanted that claim, citing that he did not remember saying any of it because he was drunk and on cocaine during the interview. But a mere month before that interview, Moore tweeted, “I’m putting people’s house info with google earth directions. Life will be amazing.” Not only that, he tweeted that if someone dies as a result of his website, it will only bring more traffic to his website, which means more money for him. 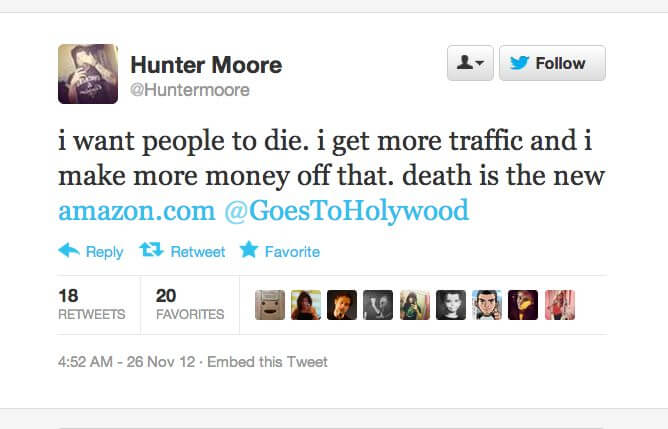 He then apparently changed his mind again and said that he won’t allow just any one’s address to be shown, just the addresses of his critics and those who pursue legal action against him. But wanting to ensure that the world knows that he is a humanitarian, he also said, “If a dude rapes a girl and this is her way of getting back at him, then I’ll publish his address.” How will Hunter ensure that a rape actually occurred, and that it is not just revenge by a jilted girlfriend who now has her ex’s address up, labeled as a “rapist,” for the world to see? Unfortunately, he did not elaborate.

It is this very point that has brought the story of Amanda Todd to light. Amanda Todd, a tenth grade student in Canada, was the subject of extreme internet abuse and bullying. After a topless photo of her began circulating the Internet (note she was a minor), she posted a 9-minute YouTube video outlining her struggles, entitled My Story: Struggling, bullying, suicide and self harm. A month later, Todd was found dead in her home, having hung herself.

The fact that Moore’s website has the very real potential to enable another situation like this has not escaped the attention of Anonymous, who has started a new campaign, led by Kentucky Anonymous (@kyanonymous), “Operation Hunt Hunter,” or, #OpHuntHunter. It is part of a bigger Anonymous campaign, “Operation Anti-Bully,” or, #OpAntiBully. Flashing pictures of Amanda Todd in their video announcement, Anonymous said in their call to action to all Anonymous across the globe, “You have a chance to make a real difference in the lives of hundreds of bullied teenagers and protect them from real harm such as rape or stalking.” They go on to say, “We will hold Hunter Moore accountable for his actions, we will protect anyone who is victimized by abuse of our Internet, we will prevent the stalking, rape, and possible murders as byproduct of his sites. Operation Anti-Bully. Operation Hunt Hunter engaged. We are Anonymous, we are Legion, we do not Forgive, we do not Forget, Hunter Moore, expect us.” Within a few days, Anonymous temporarily took down Moore’s website and merchant site, one of his biggest revenue sources. 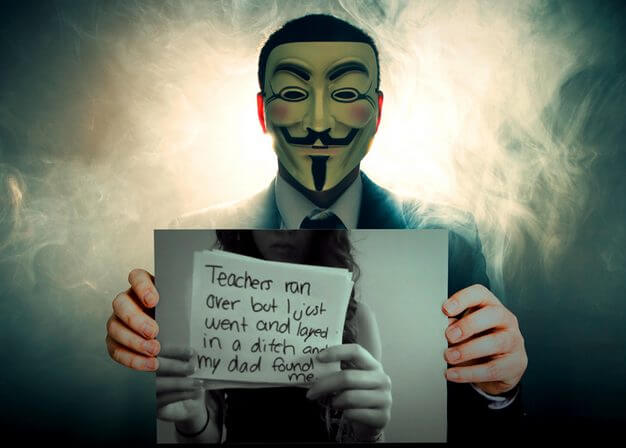 So far Moore’s defense has been that he is protected by section 230 of the Communications Decency Act, which allows website owners immunity from legal consequences stemming from content that is uploaded by a third party. But University of Maryland law professor, Danielle Citron warns that it is a fine line, “There’s an argument to be made that he’d be aiding and abetting cyberstalkers,” she goes on to say, “It’s amazing what he’s saying out loud. If your purpose is to help stalkers find their victims, that will hurt him when a jury is trying to make a finding of criminal intent.”

But Moore is caught somewhere between being a self-proclaimed world dominator (telling Forbes, “Once I launch the site, it’s going to be a world takeover.”) and a glorified troll. While he appears to possess some of the characteristics of self-made moguls such as charisma, risk-taking, a lack of caring who he tramples to get to the top, and an apparent need to dominate others and win at all costs (also, incidentally, the same characteristics of sociopaths), he seems to be lacking a few serious components that lead to longevity: any sense of self-control and methodicalness. His claims of what his website will, or won’t, do change constantly and his stories are inconsistent. Our best guess? He’s making as much money off of his sites as possible until that pesky little legal loophole behind which he’s been hiding is closed.

[Page no longer available – we have linked to the archive.org version instead] from kentucky anon on Vimeo.

Verizon Website Visitors Tracked Across Internet, Data Sold
What Does #mcm Stand for?
About the New Internet of Things Cybersecurity Law That Passed Last Month
Yes Hackers Really Do Hack Baby Monitors
All the Facts and Full Text of United Airlines Apology as Removal Video Goes Viral around the World
Social Media Command Centers the Next Big Thing in Customer Service
What is a Selfie Stick, and Do You Need One?
ProtonMail Offers Truly Encrypted Email
Share the knowledge

Number of people who have enjoyed this article: 2,908