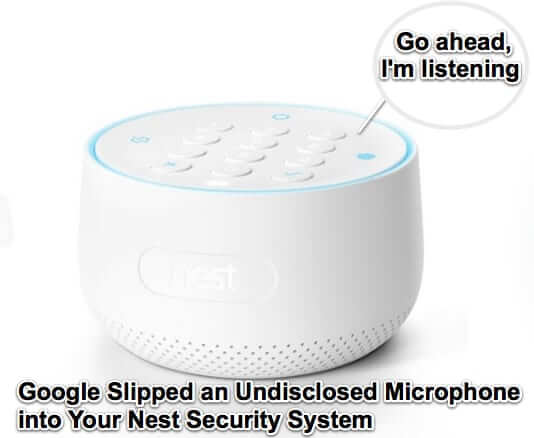 It all started with a seemingly innocent Google blog post earlier this month, in which Google announced that their ‘Hey Google’ Google Assistant was ready to go live on Nest Secure Nest Guard home security devices. Then people started having that ‘waaaait a minute…’ moment: this meant that there had to be a microphone in that Nest Guard device.

“Let’s face it,” said the announcement, “getting out the door can be hectic sometimes. Between rushing to beat the traffic, making sure you’re dressed for the weather and running through your to-do list, there’s a lot to juggle—and we could all use a little assistance streamlining our routines. Starting today we’re adding a feature to Nest Secure to do just that: the Google Assistant will be available on your Nest Guard, so you can ask it questions like, “Hey Google, do I need an umbrella today?” before you set your alarm and leave the house. Nest Guard is the brains of your Nest Secure; it contains a keypad and all the smarts that power the system. It’s usually placed in a spot with lots of traffic (like the front doorway) making it useful as you come and go.”

In the words of Dana Carvey’s Church Lady, isn’t that special?

The only problem is that the Nest Guard had never been sold as “microphone included”. In fact, Google had never revealed that there was microphone hidden within the depths of their Nest Secure system in the Nest Guard device. (How secure do you feel now?)

While it isn’t known how many Nest Guard devices have been sold and installed, we do know that just about exactly a year ago, Nest CEO Marwan Fawaz said in an interview with c|net that over 11million Nest devices in total had been sold.

In response, this week the Electronic Privacy Information Center (EPIC) has written a letter to the Federal Trade Commission (FTC) asking the FTC to require Google to divest themselves of Nest, and to provide the data that “it wrongfully obtained from Nest customers,” and, in a rather epoch ‘told you so’, reminding the FTC that EPIC had filed a complaint with the FTC back in 2014 over Google’s acquisition of Nest, and noting that the “Commission clearly failed to address the significant privacy concerns presented in the Google acquisition of Nest.”

(Read EPIC’s full letter to the FTC about the Google Nest Microphone here.)

For their own part, Google has issued the following statements:

“The Google Assistant on Nest Guard is an opt-in feature, and as the feature becomes available to our users, they’ll receive an email with instructions on how to enable the feature and turn on the microphone in the Nest app. Nest Guard does have one on-device microphone that is not enabled by default.”

“The on-device microphone was never intended to be a secret and should have been listed in the tech specs. That was an error on our part. The microphone has never been on, and is only activated when users specifically enable the option. Security systems often use microphones to provide features that rely on sound sensing. We included the mic on the device so that we can potentially offer additional features to our users in the future, such as the ability to detect broken glass.”

So, if you have a Nest Guard installed in your home, do you care that there was a microphone that you didn’t know about, or do you consider it a bonus?

And if you don’t have a Nest Guard, but had possibly seen one in your future, does this impact that vision at all?

FBI, Feds Want to be Able to Decrypt Your Encrypted Email and Messages
Tesla: Data Security Hell on Wheels?
Why is Everyone Talking about Leaked Nude Celebrity Selfie Pictures?
How GDPR Affects Individuals in the U.S. and Around the World Including What Rights Individuals Have...
State of Colorado Pandemic Unemployment System Compromised
What YOU Need to do RIGHT NOW Because of the Equifax Data Breach in Order to Protect Yourself
Massive Capital One Breach of Data Stored on Amazon Affects Millions
Top Web Browsers for Android in 2020
Share the knowledge

Number of people who have enjoyed this article: 1,274