Today Google posted some news on their blog, along with the release of their Transparency Report, which shows increasing requests from the government for private user data. In fact, the report shows that, of all the governments in the world, the U.S. leads the pack in personal information requests.

Google has always taken issue with the fact that the government requires them to report certain user data and so created the transparency report as their way of showing the public what they’re forced to do and, they hope, will cause more pressure from the public on the government surveillance issue. Says Google, “We’re always looking for ways to make the report even more informative. So for the first time we’re now including a breakdown of the kinds of legal process that government entities in the U.S. use when compelling communications and technology companies to hand over user data.” 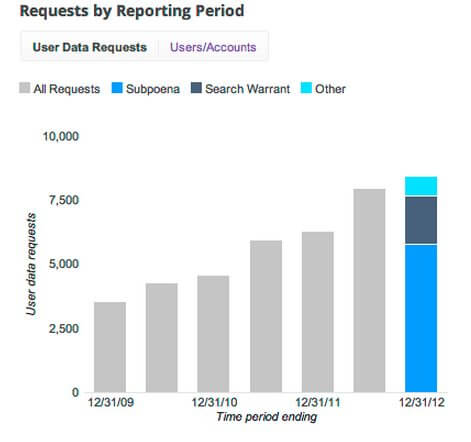 They went on to say, “Today we’re releasing new data for the Transparency Report, showing that the steady increase in government requests for our users’ data continued in the second half of 2012, as usage of our services continued to grow. We’ve shared figures like this since 2010 because it’s important for people to understand how government actions affect them.”

The Electronic Communications Privacy Act (ECPA) is what sets the regulations for government spying and it was thrust into the spotlight of public awareness after the General David Petraeus scandal broke. The FBI was surveying, among other things, Petraeus’s gmail conversations with inamorata Paula Broadwell.

Google gave a snapshot of the Transparency Report, spanning from July through December 2012:

“68 percent of the requests Google received from government entities in the U.S. were through subpoenas. These are requests for user-identifying information, issued under the Electronic Communications Privacy Act (“ECPA”), and are the easiest to get because they typically don’t involve judges.

22 percent were through ECPA search warrants. These are, generally speaking, orders issued by judges under ECPA, based on a demonstration of “probable cause” to believe that certain information related to a crime is presently in the place to be searched.

The remaining 10 percent were mostly court orders issued under ECPA by judges or other processes that are difficult to categorize.”

Says Internet privacy advocates the Electronic Frontier Foundation, “In a climate where the expansion of law enforcement powers to access users’ digital information is being sought, it comes as little surprise that government entities are also turning to Google in attempts to obtain even more user information. Google’s transparency reports shine a light on electronic surveillance practices that have dramatic implications for privacy. In democratic nations in particular, the right to privacy should be protected and governments should offer greater transparency and disclosure for why they are seeking user data.”

If you want to see Google’s transparency report, you can check it out here.

We’re still waiting for Facebook’s transparency report, but we won’t hold our breaths.