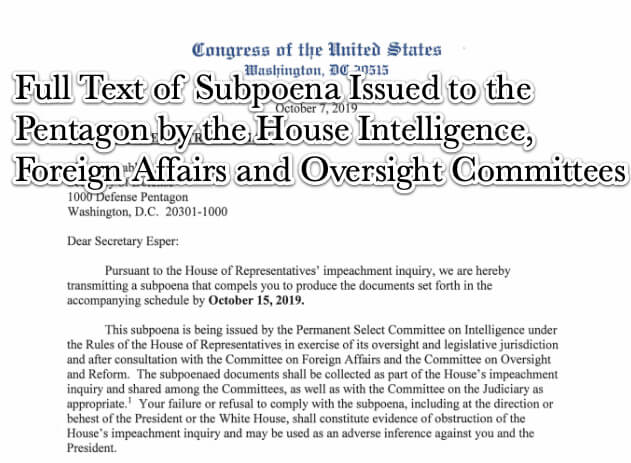 Below is the full, searchable text of the subpoena served on the Pentagon by the House Intelligence, Oversight and Reform, and Foreign Affairs Committees on October 7, 2019, in the matter of the House impeachment inquiry. Note that the subpena to the Office of Management and Budget (OMB) is essentially the same. We are posting this asap, and will be cleaning it up as we go along. Note that we have removed footnotes for ease of reading, however they are included in the PDFs linked at the bottom.


Full Searchable Text of Subpoena Issued to the Pentagon by the House Intelligence, Foreign Affairs and Oversight Committees on Monday, October 7, 2019

Pursuant to the House of Representatives’ impeachment inquiry, we are hereby transmitting a subpoena that compels you to produce the documents set forth in the accompanying schedule by October 15, 2019.

The Committees are investigating the extent to which President Trump jeopardized US. national security by pressing Ukraine to interfere with our 2020 election and by withholding military assistance provided by Congress to help Ukraine counter Russian aggression, as well as any efforts to cover up these matters.

In September 2018, Congress appropriated $250 million to the Department of Defense for the Ukraine Security Assistance Initiative for fiscal year 2019. In its Committee report authorizing the appropriation, the Senate Committee on Armed Services wrote:

The committee remains deeply concerned by the continuing aggression of Russia and Russian-led separatist forces in Ukraine. The committee welcomes the delivery of Javelin Missiles and Javelin Command Launch Units to Ukraine, which sends a strong signal of the United States’ commitment to the defense of allies and partners. The committee continues to emphasize the importance of providing security assistance and intelligence support, including defensive lethal assistance, to the Government of Ukraine to build its capacity to defend its sovereignty and territorial integrity.

On February 28 and May 23, 2019, Under Secretary of Defense for Policy John C. Rood notified Congressional chairs that the Department of Defense intended to release large tranches of this military aid to Ukraine. The Congressional committees approved the defense assistance shortly after each notification. On June 18, 2019, the Defense Department announced that it was finalizing $250 million in security cooperation funds to Ukraine.

According to multiple press reports, at some point in July 2019, President Trump ordered Acting Chief of Staff and Office of Management and Budget (OMB) Director Mick Mulvaney to freeze the military aid to Ukraine, and Mr. Mulvaney reportedly conveyed the President’s order “through the budget office to the Pentagon and the State Department, which were told only that the administration was looking at whether the spending was necessary.”

According to press reports, “Administration offcials were instructed to tell lawmakers that the delays were part of an ‘interagency process’ but to give them no additional information” Officials at the Departments of State and Defense reportedly were “puzzled and alarmed” after learning about the White House’s directive. Defense Department officials reportedly “tried to make a case to the White House that the Ukraine aid was effective and should not be looked at in the same manner as other aid,” but “those arguments were ignored.” State and Defense Department officials reportedly contacted Congress to inform them of the freeze imposed by the White House.

In August 2019, Senator Ron Johnson was informed by Gordon Sondland, the US. Ambassador to the European Union, that if Ukraine would “get to the bottom of what happened in 2016 – if President Trump has that confidence, then he’ll release the military spending.” Senator Johnson stated: “At that suggestion, I winced.” He also stated: “My reaction was: Oh, God. I don’t want to see those two things combined.”

As you are aware, the Impoundment Control Act of 1974 authorizes the President to withhold the obligation of funds only “(1) to provide for contingencies; (2) to achieve savings made possible by or through changes in requirements or greater efficiency of operations; or (3) as specifically provided by law.” The President is required to submit a special message to Congress with information about the proposed deferral of funds.

On August 30, 2019, Chairman Adam Smith and Ranking Member Mac Thornberry of the House Committee on Armed Services wrote a letter to Mr. Mulvaney requesting information regarding why military assistance to Ukraine was being withheld and when it would be released. They wrote: “This funding is critical to the accomplishment of US. national security objectives in Europe.”

On September 3, 2019, a bipartisan group of Senators – including Senators Rob Portman, Jeanne Shaheen, Dick Durbin, Richard Blumenthal, and Ron Johnson – wrote a letter requesting that OMB release the military assistance to Ukraine that the Trump Administration was withholding:

The funds designated for the Ukraine Security Assistance Initiative are vital to the long term viability of the Ukrainian military. It has helped Ukraine develop the independent military capabilities and skills necessary to fend off the Kremlin’s continued onslaughts within its territory. In fact, Ukraine continues to fight daily on its eastern border against Russia-backed separatists in the provinces of Donetsk and Luhansk, and over 10,000 Ukrainian soldiers and civilians have lost their lives in this war. U.S.-funded security assistance has already helped turn the tide in this conflict, and it is necessary to ensure the protection of the sovereign territory of this young country, going forward.

On September 5, 2019, Chairman Eliot L. Engel and Ranking Member Michael McCaul of the House Committee on Foreign Affairs wrote a letter to OMB urging the Trump Administration to lift its hold on security assistance funds to support Ukraine, writing: “These funds, which were appropriated by Congress as Foreign Military Financing and as part of the Ukraine Security Assistance Initiative and signed into law by the President, are essential to advancing US. national security interests.”

On September 24, 2019, Senate Majority Leader Mitch McConnell stated that, although he was “very actively involved in advocating the aid,” he “was not given an explanation” about why it was being withheld, even though he talked to the Secretary of Defense and the Secretary of State. He stated: “I have no idea what precipitated the delay.”

The enclosed subpoena demands documents that are necessary for the Committees to examine this sequence of these events and the reasons behind the White House’s decision to withhold critical military assistance to Ukraine that was appropriated by Congress to counter Russian aggression.

Please contact staff for the Permanent Select Committee on Intelligence at (202) 225-7690 to arrange for the production of documents.

PDF of Original Subpoena Issued to the Pentagon by the House Intelligence, Foreign Affairs and Oversight Committees in the Matter of the House Impeachment Inquiries

PDF of Original Subpoena Issued to the OMB by the House Intelligence, Foreign Affairs and Oversight Committees in the Matter of the House Impeachment Inquiries

People also searched for Text of a subpoena

About the Amazon Gift Card in Your Mailbox Scam 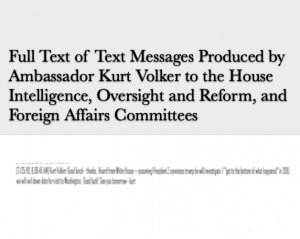