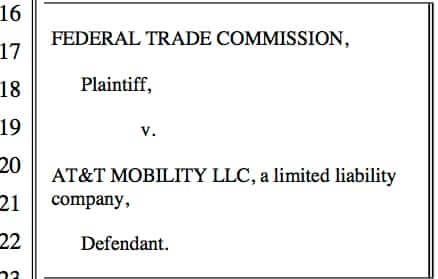 This case will clearly turn, at least in part, on the meaning of “unlimited” in ‘unlimited data’. AT&T will argue that their unlimited data customers can still use all of the data they want (thus making it “unlimited” under one definition), but that at times it will be slower.


The Feds will argue that throttling is a limitation on the data, and thus a violation of the promise of “unlimited” that was used to induce the customers to stay with AT&T.

Some choice excerpts from the lawsuit include:

When it implemented its throttling program, Defendant possessed internal focus group research indicating that its throttling program was inconsistent with consumer understanding of an “unlimited” data plan. The researchers concluded that, “[a]s we’d expect, the reaction to [a proposed data throttling program] was negative; consumers felt ‘unlimited should mean unlimited[.’]” The focus group participants thought the idea was “clearly unfair.” The researchers highlighted a consumer’s comment that “[i]t seems a bit misleading to call it Unlimited.” The researchers observed that “[t]he more consumers talked about it the more they didn’t like it.” This led the researchers to advise that “[s]aying less is more, [so] don’t say too much” in marketing communications concerning such a program.

Numerous complaining customers have accused Defendant of failing to live up to its end of their bargain because its throttling program imposes a limitation on their unlimited data plan.

Defendant has numerous alternative ways to reduce data usage on its network that do not involve violating its promise to customers. One alternative would involve Defendant requiring existing unlimited data customers to switch to a tiered data plan at renewal. Defendant considered and rejected this approach in part because of concern that renewing customers would switch providers rather than switch to one of Defendant’s tiered data plans. Another alternative would involve Defendant introducing its throttling program at renewal, with disclosures at point of sale. Defendant considered and rejected such an alternative, in part because it “[a]pplied to all customers” and would not let Defendant “isolat[e] communications to [the] heaviest users.” Yet other alternatives might include limited, narrowly tailored throttling programs that are consistent with Defendant’s contracts, advertising, and other public disclosures.

Says FTC Chairwoman Edith Ramirez, in an FTC statement about the lawsuit against AT&T, “AT&T promised its customers ‘unlimited’ data, and in many instances, it has failed to deliver on that promise. The issue here is simple: ‘unlimited’ means unlimited.”

Ah, but what exactly does ‘unlimited’ mean? That’s the question.

You can read the FTC’s lawsuit against AT&T here.

iPhones Not Sending Text Messages to Android Phones Sparks iMessage Lawsuit
How to Stop SMS Text Spam and How to Report SMS Txt Msg Spam
Stunning Example of What Cell Phone Records and Publicly Available Data Can Reveal About You
FCC Publishing Weekly List of Telemarketer and Robocall Numbers
Slow Internet Speed and What You Can Do About It
Amazon 3D Smartphone to Be Announced June 18
New CAN-SPAM Rules Effective This Month Require Single Action Opt-Out, Designated Senders, and More
Bitcoin Exchange Founder Charged with Money Laundering