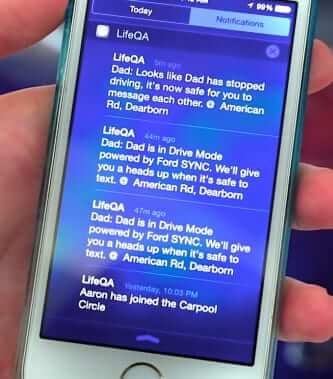 Ford has just added the Life360 “don’t text me while I’m driving” Drive Mode app to the Ford SYNC applink system – the system that integrates your smartphone into your Ford vehicle’s own voice recognition, voice command, and communications system. Life 360 is touted as a boon for parents of teenagers, we’re not so sure.

The way that Life360 Drive Mode works is that you identify individuals who are in your Life360 circle, and once the Ford SYNC applink system detects that the driver’s cell phone is connected to the system (i.e. in the car), it sends out a text message to those people, telling them not to text the driver until the phone is no longer in the car (i.e. the app is disconnected from Ford SYNC). Basically, it sends a text message to everybody in your Life360 circle when your phone enters your car, and when it exits your car (how annoying will that be?).

This Won’t be Annoying at All

“Responsible driving habits are top priorities at Ford Motor Company, and we are pleased to be working with Life360 to help reduce driver distractions,” explains Ford’s Connected Services Product manager, Julius Marchwicki. “With the integration of Life360 Drive Mode, we are helping to keep drivers’ attention on the road by letting their loved ones know that they are behind the wheel, encouraging family members and friends to hold off on sending texts.”

The Life360 app was developed by Life360, Inc.. Says Life360 CEO Chris Hulls, “We are thrilled to be working with Ford to take on such an important issue and help reduce texting and driving. Keeping families connected is one of our core tenets, and we’re proud our technology can also help play a key role in promoting distraction-free driving.”

As we said, the Life360 app works on technology that connects your phone to your the Ford SYNC system, and tracks it so long as it is connected to your car’s Ford SYNC system. So in addition to sending out all those text message, it reports on where your phone is at any given moment while in your car.

Explains Ford in a statement about Life360 Drive Mode, “Users can see where their circle of family and friends are on a private map, stay connected through one-to-one or group messages, and get help in an emergency.”

“Drivers can also check the latest location of family members through the SYNC display or with voice commands,” the statement goes on to say. “By saying, “Mom’s location,” or asking “Where is Dave?” the system pinpoints the person’s location on a map and offers a location address.”

Of course, this is by far not the first app to offer a way to spy monitor your teen’s (or anyone else’s) driving. Key to Safe Driving (K2SD), DrivePulse, and Teen Arrive Alive have all offered similar technologies. It’s worth noting that Teen Arrive Alive was acquired by IntelliOne (now Uinformatics) in 2007 and promptly buried, Key to Safe Driving disappeared years ago, and DrivePulse shut their doors at the first of the year.

It’s possible that with Ford behind the Life360 effort, it may last longer, but personally we wouldn’t bet on broad adoption.

At least not knowing, voluntary adoption – and ongoing use – by the teen drivers it purports to monitor.

With Google Photos Ending Unlimited Storage, Here Is How to Check How Much Space You Have Left
Kissing Across the Internet: Kissenger Device and App Sends Haptic iPhone to iPhone Kisses that You...
How to Look Good in Video Calling Apps
Russian Facial Recognition App Raising Privacy Concerns Around the World
What is "Dark Social" Media and Does it Matter?
New Charlie Virtual Meeting Assistant App - a Privacy Nightmare?
How to Know If You Are Interacting With a Bot
How to Take a Selfie with the CamMe Selfie App
Share the knowledge

Number of people who have enjoyed this article: 2,118