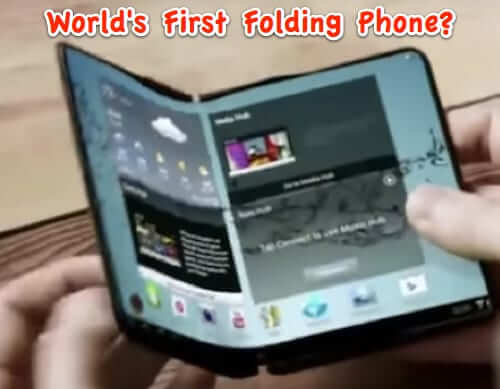 Samsung actually announced that they were working on a foldable phone more than two years ago, and even produced a concept video at the time.

Of course, making a screen that can be folded – not hinged or jointed, but actually folded – is no easy trick. “It is complex technology to manufacture reliably and this has implications on the eventual cost of devices using such screens,” CCS Insights’ Chief Researcher Ben Wood told the the International Business Times.

Samsung is developing the foldable screen by using OLED screen technology. OLED stands for ‘organic light-emitting diode’, and Samsung has been a pioneer of this technology for years.

In addition to the technical challenges inherent in developing a foldable smartphone and bringing it to market, is the issue of cost. As smartphone prices have dipped – or at least become normalized – will consumers jump on the next new thing even if it costs $100 or $200 more?

Still, according to inside sources, Samsung is on track to announce a folding phone by the end of this year or the beginning of 2017. During a conference call earlier this year, Samsung Display Director Lee Chang-hoon is quoted as saying “Development of Foldable OLED is taking place according to our plan. We are planning on mass-production and release of this product by discussing with our partners.”

NSA Collection of Phone Data Unconsitutional, says Federal Court - the Klayman Decision Explained
How to Make an iPhone Answer Automatically on a Bluetooth Headset
Technologies that Will Shape Your Internet Use in the Future
New Device Tracking Apps Help You Find Your Lost Keys, Your Wallet, Even Your Phone Itself
Paris Hilton's Sidekick Hacked - Data Posted to Internet
5 Rising Social Media Platforms to Watch-If You Are Business Minded
Google Pay: What it is, and how to use it
The Phone Privacy Handbook: How to Make Your Phone Location Nearly Impossible to Track
Share the knowledge

One thought on “Foldable Phone Coming Soon from Samsung”

Number of people who have enjoyed this article: 1,331