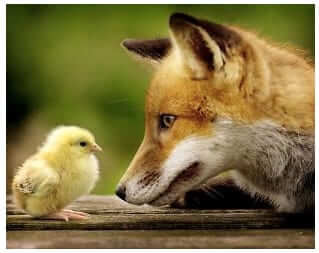 This week there was an explosion in Washington, DC – specifically, Dianne Feinstein, chair of the Senate Intelligence Committee, exploded over documents vanishing from CIA provided computers at a CIA leased facility, and specifically relating to the CIA internal “Panetta Review”.

While CIA director John Brennan and Feinstein argue, we can’t help but wonder: Just how naive do you have to be to believe that when the CIA produces documents on CIA provided computers, in a CIA leased facility, guarded by the CIA, they won’t have left themselves a way to access those same computers? Or that they won’t use it?

And, just who is the fox, and who are the hens, in this scenario?

Note: This article is intended as editorial commentary on just one aspect of the unfolding drama, and is not an in-depth treatment of the underlying substantive issues.

Explains Senator Feinstein, in an address that she made on the Senate floor yesterday, “Per an exchange of letters in 2009, then-Vice Chairman Bond, then-Director Panetta and I agreed in an exchange of letters that the CIA was to provide a, quote, stand-alone computer system, end quote, with a, quote, network drive segregated from CIA networks, end quote, for the committee that would only be accessed by information technology personnel at the CIA who would, quote, not be permitted to share information from the system with other CIA personnel, except as otherwise authorized by the committee, end quote.”

After Director Panetta left the CIA, the position was filled by John Brennan. It was under his directorship that, says Feinstein, that CIA-provided computer network was searched several weeks ago.

Feinstein goes on to explain that: “…when the staff found a document that was particularly important or that might be referenced in our file report, they would often print it or make a copy of the file on their computer so they could easily find it again. There are thousands of such documents in the committee’s secure spaces at the CIA facility.”

Now, it is important that we explain what is at the root of this aspect of the explosion – because the main issue is not that the CIA was able to search the computers – it was that they did search the computers, and what it was for which they were looking.

They were looking for that Panetta Report, which was an expose of CIA torture methods which were used on terror suspects. That report was never intended to fall into the hands of the Senate Intelligence Committee, and yet, somehow, it was leaked to the committee.

Of course, one of the many ironies of this standoff is that Feinstein herself was among the first to condemn leakers when the Snowden situation first came to light. And yet here is the Senate Intelligence Committee, chaired by Feinstein, possibly possessing just such a leaked document.

So, primarily, the CIA was looking for that not-supposed-to-have-been-leaked internal Panetta review on those computers on which it had produced a metric-boatload of documents to the Senate Intelligence Committee.

And on the other end, committee folks started noticing that documents that had been on those CIA provided computers were suddenly vanishing.

The CIA fully copped to their searching those computers. Feinstein explains that “…on January 15th, 2014, CIA Director Brennan requested an emergency meeting to inform me and Vice Chairman Chambliss that without prior notification or approval, CIA personnel had conducted a search — that was John Brennan’s word — of the committee computers at the off-site facility.”

She goes on to say that “This search involved not only a search of documents provided by the committee by the CIA, but also a search of the standalone and walled-off committee network drive containing the committee’s own internal work product and communications. According to Brennan, the computer search was conducted in response to indications that some members of the committee staff might already have had access to the internal Panetta review.”

(Read the full transcript of Dianne Feinstein’s blasting of the CIA, on the Senate Floor, at the Wall Street Journal)

Now, we don’t presume to comment on the substantive issues at hand. In fact we are sure it will be years before the facts come to light – if ever they do or, indeed, if they are even knowable.

But, that anybody would be surprised that the CIA would surreptitiously and clandestinely search and destroy material residing on computers provided by them, in a facility leased and guarded by them, is, well, surprising.

Never Heard of People Data Labs? They've Heard of You, Likely Have Your Data and It Was Exposed in a...
About the Jeep Hack and Hackers Hacking Cars and What to Do About It
Gmail’s Spam Problem and What You Can Do About It
Online Version of the Bush Cheney CIA Interrogation and Torture Report
Don't Click On or Open Screenshot[.]photos Links!
UK Report: Mass Interception of Citizen Data Vital to Security
What is Project Eavesdrop's Pwn Plug?
The getaddrinfo Vulnerability that Has Everyone Freaking Out Explained
Share the knowledge

Number of people who have enjoyed this article: 1,439