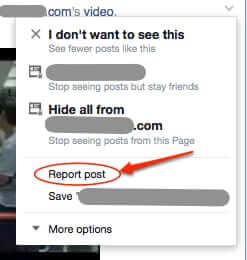 It’s an Internet-age old conundrum: How can you tell if something in your Facebook news feed is a hoax or scam? This week Facebook announced that they will start tagging hoaxes for you in your newsfeed. Actually, they will start letting you know when other users have identified and tagged something as a hoax.

Mind you, they will start identifying hoaxes, not removing them, even though their announcement says they will be ‘showing fewer hoaxes’!

In fact, their announcement very clearly states that “We are not removing stories people report as false and we are not reviewing content and making a determination on its accuracy.”

So just what the heck are they doing then?


In Facebook’s announcement of showing fewer hoaxes in your news feed, Facebook explains that “Posts that receive lots of reports will be annotated with a message warning people that many others on Facebook have reported it.”

So, while they will add a note to a post, saying there have been a lot of reports that the post is a hoax, they will not be removing it from the system. Rather, they say, this new policy “reduces the distribution of posts that people have reported as hoaxes and adds an annotation to posts that have received many of these types of reports to warn others on Facebook.”

Of course, this all depends on users actually reporting that something they saw on Facebook is a hoax.

In case you were wondering, here are all of the steps you need to take to report something as a hoax.

Look for the dropdown menu chevron in the upper right-hand corner of the post you want to report.

This will give you the following options from which to choose, to explain why you are reporting the post: 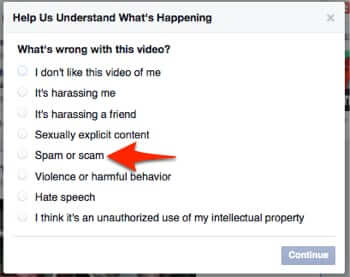 Now, every time we have clicked on “Report post”, on different items, we get a slightly different menu, with no seeming rhyme or reason (such as, not always one for news stories, a different one for photos, one for videos, one for links, etc.). The menu that Facebook shows in their announcement looks like the below, although we have yet to see it, even on a news story: 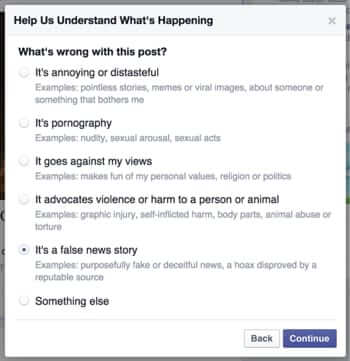 But, again, this all relies on enough Facebook users taking all those steps on a given post.

Our bet is that the percentage of Facebook users who a) recognize something as a hoax, and then b) take the affirmative step of actually reporting it, is not only vanishingly small, but statistically so insignificant as to not move the needle enough to trigger the hoax tag. Although we’d love to be proved wrong.

How to Stop Facebook from Posting Your Location (2016)
What to Do When Your Facebook or Other Account has Been Hacked
Facebook to Introduce Sympathize Button to Show Sympathy
Is The Internet Changing Our Brains?
Facebook to Buy 450 Million WhatsApp Users for $19 Billion Package
You May Be Missing Private Messages on Facebook If You Aren't Looking in These Two Places
Mark Zuckerberg Announces that Facebook Will Now Be All About Privacy and Unified Messaging Across W...
UK Passes Law Making Domestic Violence over Social Media a Crime
Share the knowledge

Number of people who have enjoyed this article: 1,793