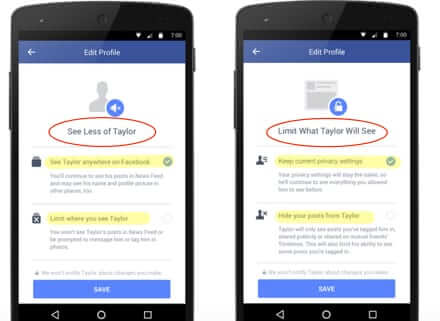 Facebook is testing a new feature to make it less awkward when you break up with someone who is also on Facebook, allowing you to “see less of them” while not actually unfriending them. After all, as the song goes, breaking up is hard (enough) to do, without having to also unfriend your ex. So if you are not the sort who gets a perverse satisfaction out of hitting ‘unfriend’ so that your ex knows that you have unfriended them, read on.

Explains Facebook Product Manager Kelly Winters, in a post about the new ‘see less of your ex’ feature, “…we are testing tools to help people manage how they interact with their former partners on Facebook after a relationship has ended. When people change their relationship status to indicate they are no longer in a relationship, they will be prompted to try these tools.”

Winters goes on to explain that the options include:

Ditch that Rat Taylor without Unfriending Him

Right now these tools are being tested in Facebook’s mobile app, and they will roll them out more broadly once they have them set the way that they want them.

Says Winters, “This work is part of our ongoing effort to develop resources for people who may be going through difficult moments in their lives. We hope these tools will help people end relationships on Facebook with greater ease, comfort and sense of control.”

Have you tested these tools? If so, let us know how they worked for you (and we’re sorry to hear about your breakup).