In yet one more bid to ensure that Facebook users never leave Facebook’s site (and, of course, if they do, Facebook will be following them), Facebook has announced the launch of their Facebook Movies service. The Facebook movie service, which is a movie rental service, allows users to trade Facebook credits to rent and stream a movie for up to 48 hours. First up: the Batman movie, The Dork Knight.

That said, the Facebook movie rental service isn’t actually being offered by Facebook itself, so much as being permitted by Facebook, for a cut of the action. The service is actually the initiative of Warner Brothers (“Warner Bros.”), although other studios are sure to follow suit if the initiative if successful. It is Warner Bros. that is offering the streaming of Dark Knight, on Facebook, on the Dark Knight‘s Facebook page.

Explains Thomas Gewecke, Warner Bros. President of Digital Distribution, “Facebook has become a daily destination for hundreds of millions of people. Making our films available through Facebook is a natural extension of our digital distribution efforts. It gives consumers a simple, convenient way to access and enjoy our films through the world’s largest social network.”

Watching a movie offered through Facebook for streaming movie rental is as simple as clicking “Watch” from the movie’s Facebook page: 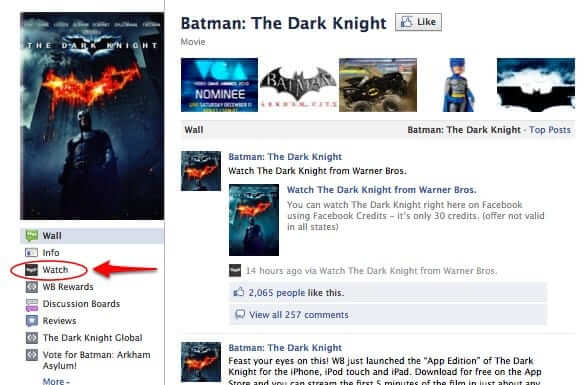 Ok, well maybe not that simple – nothing on Facebook ever is. You see, the bottom line is that watching a movie on Facebook is enabled by a movie watching app. Here’s the process:

After you click “Watch”, you will see this screen: 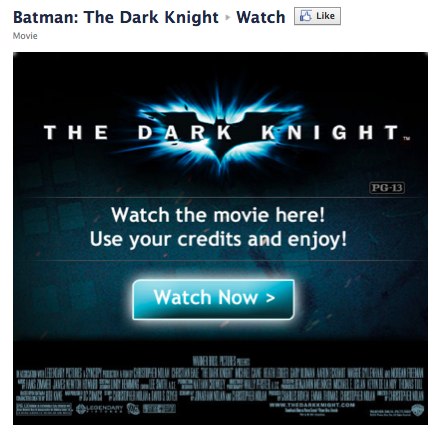 Once you click through, it will become clear that you have to permit the movie watching application, in all it’s ‘glory’, including letting the application access your name, profile picture, gender, networks, user ID, and your list of friends: 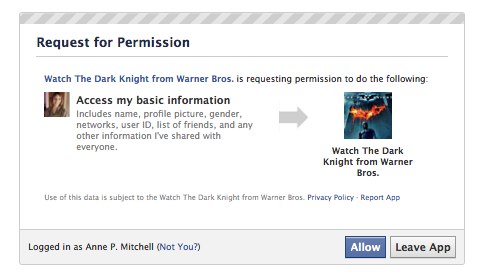 Always willing to take one for the team, we clicked “Allow” to see what would happen next. And what happens next is that you are directed to the place where you can purchase Facebook credits in order to watch the movie. Note the area that says “Use credits”. When you click on “Pay with Facebook”, if you have enough credits in your account, it will take you to a screen where you can start the movie. If you don’t already have enough Facebook credits, it will give you a screen through which you can purchase more Facebook credits. 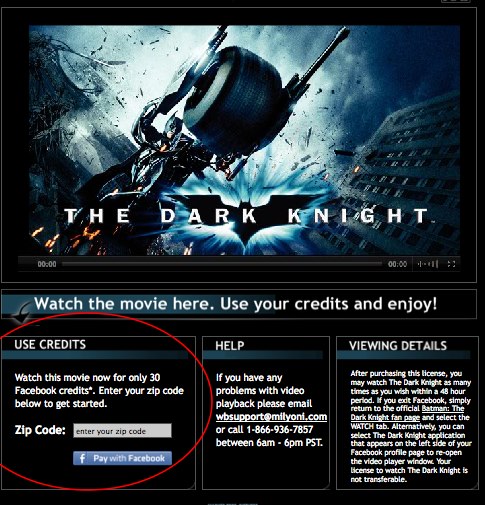 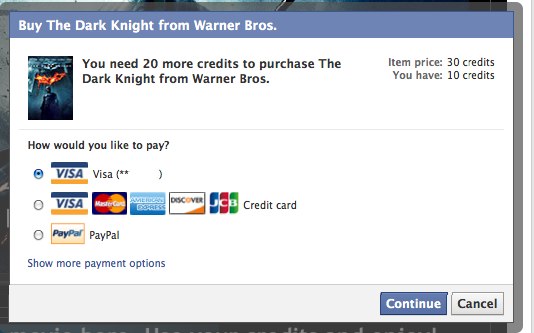 Facebook credits are the only way that you can pay to watch a movie through Facebook – you must purchase credits, which you can then redeem to watch the movie.

Facebook’s cut of the credits that you purchase? A cool 30%.

Number of people who have enjoyed this article: 3,868