Facebook announced today that it has integrated Skype into the Facebook framework, to allow users to make video calls right from Facebook. The announcement took place days after Google soft-launched the new Google social network, Google+, which also includes a video chat feature in the form of G+ Hangouts.

Once you have enabled Skype from Facebook, you will be able to instantly video chat with other users – Facebook friends – who have also enabled it. How will you know? You’ll see a “Call” button in between the “Message” and “Poke” buttons:

And if you click to call, and they don’t answer, you can also leave a video message.

Skype is the subject of a deal to be acquired by Microsoft which, although not yet finalized, was announced earlier this year. Facebook’s Mark Zuckerberg, in announcing the new Skype-Facebook service, said to the Skype folks present, “Now that you guys are owned by Microsoft, that gives us a sense of stability that you’re going to be with a company that we can trust.”

Take that for whatever it’s worth. 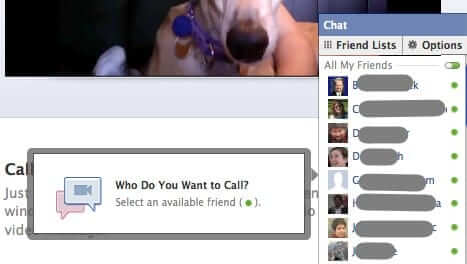 Or you can simply trip through your friends looking for that “Call” button.

Calls for Users to Leave Facebook Amid News that Facebook Quizzes Facilitated Cambridge Analytica Fa...
Cool Photo Editing Apps That Makes Your Phone Pictures Standout
Facebook to Launch "FaceCoin" Cryptocurrency Bitcoin Competitor
About All Those She's Gone Ads on Facebook
Federal Agencies to Include Your Social Media Accounts in Security Clearance Background Check
What to Do When Your Phone Number is Associated with Someone Else's Facebook Account
Facebook Tagging of Photos and Facebook Facial Recognition: How it Works and How to Opt Out of Tagg...
Facebook's New Dating App and Service: Everything You Need to Know Right Now
Spread the love