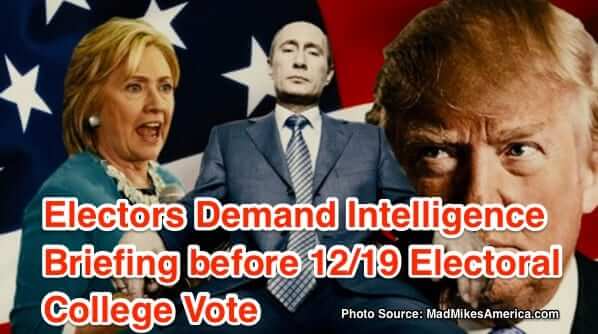 In an unprecedented move, electoral college electors from several states, and both parties, have published an open letter to Director of National Intelligence James Clapper, demanding an intelligence briefing on President-elect Donald Trump’s ties to, and assistance from Russia in winning the election – and demanding it before they cast their votes next week on December 19th.

“Additionally, the Electors will separately require from Donald Trump conclusive evidence that he and his staff and advisors did not accept Russian interference, or otherwise collaborate during the campaign, and conclusive disavowal and repudiation of such collaboration and interference going forward,” the electors say in the open letter.

The Internet, cyberwarfare, and Internet security are at the very heart of some of the issues that have been raised in this election – Russia has been blamed for (and according to some in the intelligence community confirmed to have been) election tampering by hacking into various databases and releasing damaging information only against Trump’s rival, Hilary Clinton.

Here’s the full text of the letter:

We are Electors who were selected by the voters of our states to represent them in the Electoral College on December 19, 2016. We intend to discharge our duties as Electors by ensuring that we select a candidate for president who, as our Founding Fathers envisioned, would be “endowed with the requisite qualifications.” As Electors, we also believe that deliberation is at the heart of democracy itself, not an empty or formalistic task. We do not understand our sole function to be to convene in mid-December, several weeks after Election Day, and summarily cast our votes. To the contrary, the Constitution envisions the Electoral College as a deliberative body that plays a critical role in our system of government — ensuring that the American people elect a president who is constitutionally qualified and fit to serve. Accordingly, to fulfill our role as Electors, we seek an informed and unrestrained opportunity to fulfill our constitutional role leading up to December 19th — that is, the ability to investigate, discuss, and deliberate with our colleagues about whom to vote for in the Electoral College.

We further emphasize Alexander Hamilton’s assertion in Federalist Paper #68 that a core purpose of the Electoral College was to prevent a “desire in foreign powers to gain an improper ascendant in our councils.” The United States intelligence community has now concluded with “high confidence” that a foreign power, namely Russia, acted covertly to interfere in the presidential campaign with the intent of promoting Donald Trump’s candidacy. During the campaign Russia actively attempted to influence the election outcome through cyber attacks on our political institutions and a comprehensive propaganda campaign coordinated through Wikileaks and other outlets.

Allegations that Donald Trump was receiving assistance from a hostile foreign power to win the election began months before Election Day. When presented with information that the Russian government was interfering in the election through the course of the campaign, both in private briefings and public assessment, Donald Trump rejected it, refused to condemn it, and continued to accept their help. Donald Trump even made a direct plea to the Russian government to interfere further in the election in a press conference on July 27, saying, “Russia, if you’re listening, I hope you’re able to find the 30,000 emails that are missing.”

According to reports in the Washington Post, New York Times, and other outlets, the United States intelligence community has now concluded definitively that the Russian interference was performed to help Donald Trump get elected, yet even today Mr. Trump is refusing to accept that finding. In response to the reports, the Trump transition office instead released a statement which called into question the validity of United States intelligence findings, and declared the election over despite the Electoral College not yet casting its votes. Trump’s willingness to disregard conclusions made by the intelligence community and his continuing defense of Russia and Russian President Vladimir Putin demand close scrutiny and deliberation from the Electoral College.

Separate from Mr. Trump’s own denials of Russian involvement in the election, the confirmed communication between Trump’s aides and those associated with the Russian election interference activity raise serious concerns that must be addressed before we cast our votes. Trump-confidant Roger Stone confirmed during the campaign that he was engaged in back-channel communications with Wikileaks founder Julian Assange, responsible for releasing much of the Russian-hacked Democratic communications, and indicated that he was aware of the hacked content prior to its release. Trump foreign policy advisor Carter Page reportedly visited Moscow in July of this year, just prior to the release of hacked DNC communications, during which it was believed he met with the Putin aide in charge of Russian intelligence on the U.S. election. Page returned to Moscow this week where he claimed to be meeting with Russian business and thought leaders.

In addition to Donald Trump and his aides’ conduct, revelations about their further involvement with the Russian government over the course of the campaign demand further investigation, as well as full disclosure of findings from any ongoing or closed investigative efforts:

The Electors require to know from the intelligence community whether there are ongoing investigations into ties between Donald Trump, his campaign or associates, and Russian government interference in the election, the scope of those investigations, how far those investigations may have reached, and who was involved in those investigations. We further require a briefing on all investigative findings, as these matters directly impact the core factors in our deliberations of whether Mr. Trump is fit to serve as President of the United States.

Additionally, the Electors will separately require from Donald Trump conclusive evidence that he and his staff and advisors did not accept Russian interference, or otherwise collaborate during the campaign, and conclusive disavowal and repudiation of such collaboration and interference going forward.

We hope that the information and actions described in this letter will be provided in an expeditious manner, so that we can fulfill our constitutional duty as Electors.

Here's What is Considered an Older Adult in Terms of the Coronavirus, Flu, and Other Illnesses
Digital Driver's License Coming to Some States
Pedestrian Struck and Killed by Self-Driving Car
Teen Driving App DrivePulse Offers Remote Tracking of Your Teen Driver
Full Transcript of YouTube Video of Racist Stripper Janelle Ambrosia
Full Text of Dr. Rick Bright Whistleblower Complaint Against DHHS Over Coronavirus Handling and Push...
The Turing Daraprim Outrage Explained and How the Internet Shamed Martin Shkreli to Retract the Rate...
Scientists Prove Digital Brain to Brain Thought Communication Over the Internet
Share the knowledge