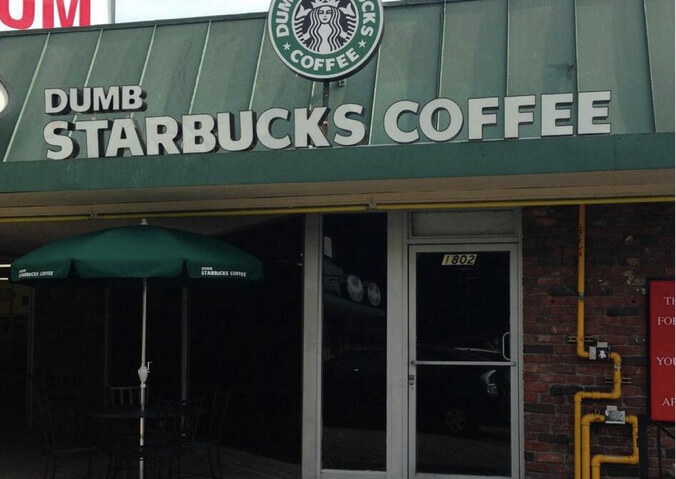 Dumb Starbucks may already be gone, but clearly it’s not forgotten. Not only that, but the owner of Dumb Starbucks, which was set up as a “parody shop”, Nathan Fielder, is said to have committed to opening another Dumb Starbucks in Brooklyn.

The original Dumb Starbucks, revealed to be a publicity stunt, opened on Friday, and was quickly shut down. Not by Starbucks’ legal team (although apparently Dumb Starbucks and Fielder did hear from them), but by the Los Angeles County Health Department. 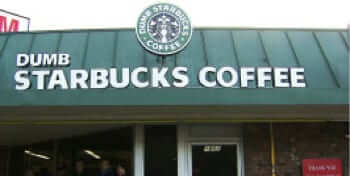 By Sunday the place was packed with people wanting a look at the parody of Starbucks, which had its own Dumb menu, and even its own parody music CDs.

On Monday (yesterday) Fielder came clean during a press conference. Fielder, whose show on Comedy Central, “Nathan for You”, had a permit to film – but no health permit for the Dumb Starbucks – said that he plans to expand the Dumb Starbucks footprint, and will be opening a Dumb Starbucks in Brooklyn, New York.

On the same day, the real Starbucks issued the following statement:

We are obviously aware of the Dumb Starbucks location in Los Feliz. It is not affiliated with Starbucks. We are evaluating our next step. While we appreciate the humor of the store, they cannot use our name. It is a protected trademark

Fielder says that he is relying on the “parody” exception to trademark infringement, and that it is a work of art. In fact a sign inside the Dumb Starbucks told patrons that it was a “work of parody art.”

We think that what he is really relying on is the publicity, and on people talking about Dumb Starbucks on social media to generate buzz. 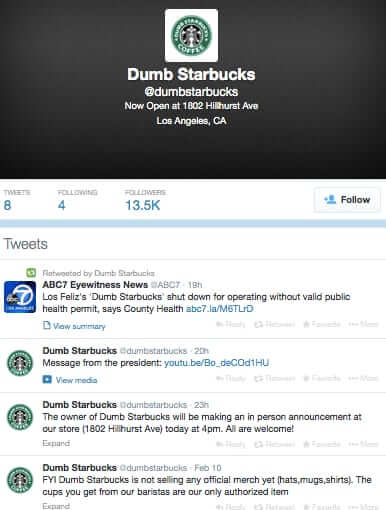 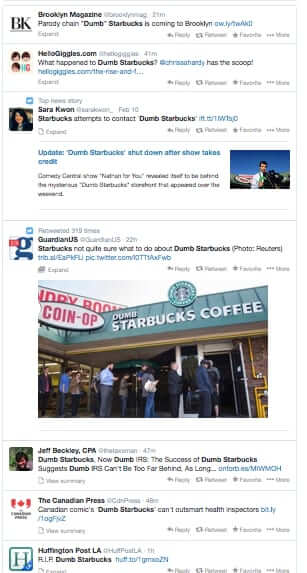 Moreover, over a million sites are talking about Dumb Starbucks, including nearly 150,000 news sites.

As publicity stunts go, this was almost certainly a calculated risk on the part of Fielder and Comedy Central. They certainly had to know that Starbucks would come after them, and the ensuing fight (or, indeed, even if they rolled over) would catapult them into the social media sphere.

Observes Jessica Harris, Social Media Strategist with Amazon Advertising (no relation to the book retailer), “As Nathan Fielder has shown us previously with his text message stunts, such as ‘2 Grams for $40,’ he has a remarkable ability to use social media to turn simple concepts into much bigger campaigns, which live on in the digital space. I still see the screenshots of his text message stunts being shared on Facebook, Tumblr and Pinterest.”

“Fielder clearly knows that shock + humor = social media hit, and is brilliantly leveraging this to, in a way, geurilla market himself and his work. The potential for this kind of advertising success through social media is the precise reason why so many brands are ditching their big ad budgets in favor of lower-cost, more-effective, and more precisely targeted digital campaigns,” adds Harris.

Check Out These 5 Apps Supporting Mental Health During the Coronavirus Pandemic
What You Need to Know about Twitter's New Terms of Service and Shadow Banning, and Rights to Your Co...
Federal Agencies to Include Your Social Media Accounts in Security Clearance Background Check
Twitter Competitor Mastodon - the New Open Source Social Network - Explained
What is Zoom and Why is Everyone Using It?
Deleted Social Media Messages Tell Story About Downing of Flight MH17
The Turing Daraprim Outrage Explained and How the Internet Shamed Martin Shkreli to Retract the Rate...
How to Know If You Are Interacting With a Bot