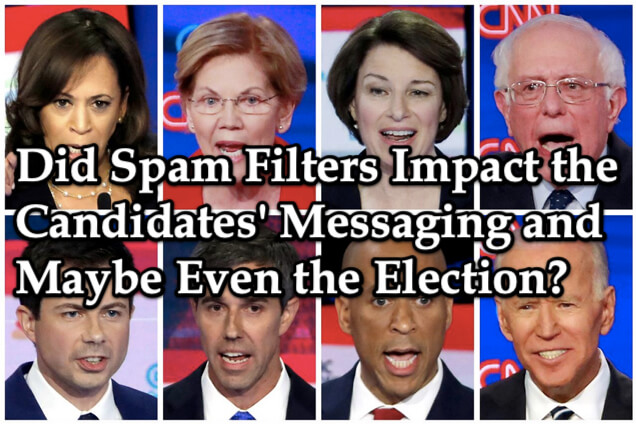 Now here’s an interesting question: do spam filters impact the presidential candidates’ messaging and thus, if you extend the question far enough, maybe even the election? That’s what one study looked at, and their conclusions are, at very least, interesting.

It’s not a dumb question. In today’s online-driven world, email plays a substantial part in any marketing messaging, and political candidates are a heavily-marketed product. And, of course, politicians are exempt from the already too-loose anti-spamming laws and rules set forth in the U.S.’s Federal anti-spamming law, CAN-SPAM (the Controlling the Assault of Non-Solicited Pornography And Marketing Act of 2003). The reason they are exempt (besides the fact that they weren’t going to handicap themselves when passing the law) is that by definition email from a politician or political candidate is political speech, and so any law that one passes regulating speech is trumped by the 1st Amendment, which prohibits the government from impinging on political speech. So political candidates are free to email you regardless of whether you asked them to, let alone want them to.

However, the law also says that email providers are free to choose to not deliver certain (or any) email to their users, or even to block it, and they can do it for any reason they like or, even, for no reason at all.

This is why when Tulsi Gabbard sued Google over her campaign email going to the spam folder, it was either clearly a publicity stunt, or she had some very bad legal advice, because Google (and any other email provider) has the explicit right to put anybody’s email they want into the spam folder.

The Markup decided to look into the question of whether or how spam filters may have impacted and continue to impact the candidates’ messaging. The Markup calls itself a “nonprofit newsroom that investigates how powerful institutions are using technology to change our society,” going on to explain that “We are a new kind of media organization, staffed with an unparalleled roster of quantitative journalists who pursue meaningful, data-driven investigations,” and that “Our approach is scientific: We build datasets from scratch, bulletproof our reporting, and show our work. We call this The Markup Method.”

The folks over at The Markup applied the Markup Method to this question by registering a Gmail account, and signing up for all of the different candidates’ email lists, and seeing where their email ended up in the Gmail system: in the inbox, in the Promotions tab, or in the spam folder.

Now, we have to say right up front that this is not nearly so scientific as the name the Markup Method might suggest. In fact, their methods were downright flawed. For one thing, almost nothing can be deduced from what happens with a single email account. In fact, almost nothing of value could be deduced even if they had created 100, nay, 1000 accounts, if they were all at only one email provider, other than what happens to candidates email at that email provider, and even then the only thing that can be deduced is the superficial obvious “so and so’s email ended up in the inbox/promotions tab/spam folder”. This is because there are a myriad of reasons that an email can end up in the spam folder, including poor authentication practices (the email provider can’t determine where the email really came from), the content (it seems spammy), the volume, or even user actions (users aren’t opening the email, or are opening the email and then marking it as spam).

Still, The Markup did conduct a thorough analysis of their not terribly robust data, and created a pretty graphic of the results.

Ultimately they say, “For the most part, Gmail did not place email from presidential candidates in the primary inbox during our experiment (Oct. 16, 2019, to Feb. 12, 2020), but some had better results than others. The pace of emails sent by each of them also varied.”

The Markup also noted that “Gabbard was added in November; Bloomberg and Steyer, in February,” and that “We signed up to receive emails from Donaldjtrump.com but didn’t receive any.”

While, again, this is basically a data point of one, it is at least interesting to note the volume of email that each candidate sent in the time period (Klobuchar with the most, at 312 pieces of email). (See graphic below.)

So, do we think that spam filtering impacted the candidates’ messaging? Sure, just like it impacts everything else – whether for better or worse depends on where you stand and how you see it. Certainly the candidates would say that it is for the worse, while many people who received that email – and likely nearly all of them who didn’t sign up for it – would say it was for the better.

As for whether it may have had or will have an appreciable impact on any election, we think it’s pretty unlikely.

What do you think?

Why the Subject Line is the Most Important Part of Your Email
How to Block or Otherwise Thwart or Deal with Spam Phone Calls on Your Land Line and Mobile Phone
New Death Notice Phishing Spam from Douglass Funeral Home
How to Create a Gmail Spam Filter for Foreign Language Spam
Looking for a Good Free Spamfighter? Here are a Few Free Spam Blocker and Free Spam Filter Options f...
Emergency! Your phone is HACKED!! Email Supposedly from Tech Crunch is Spam
Robo Revenge App: Can You Really Make Money by Threatening Robocallers? All Signs Point to Yes
Best Way to Beat Spam with Outlook 2003?
Share the knowledge

Number of people who have enjoyed this article: 839