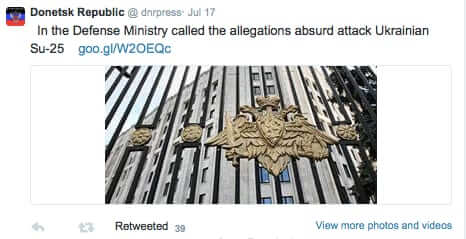 Almost immediately after Malaysian Airlines flight MH17 was shot down on Thursday, July 17, messages appeared on the Twitter and VK social media site accounts of the pro-Russian separatist Donetsk Republic (DNR) group, claiming responsibility. But the messages, attributed to DNR commander Igor Strelkov, claimed responsibility for downing an An-26 Ukrainian military plane. The messages were then hastily deleted as it became clear that the plane that was shot down was in fact a civilian commercial airliner.

“We just downed an An-26 near Torez. It is down near the Progress mine,” said Strelkov’s VK page.

At the time that it was downed, flight MH17 was flying at an altitude of 33,000 feet, well within the range for a Buk missile. The Buk missile system can reach targets as high as 80,000 feet in altitude.

Moreover, various recordings of communications that were intercepted between pro-Russian rebels and someone identified only as “a Russian military intelligence officer” that reveal rebels saying “We just downed a plane,” that it was “100% certain this is a civilian aircraft,” and, when asked whether there were many passengers on board, the rebel saying simply “%#(&%@” (Russian expletive), are now on the internet.

According to the International Business Times, one recording, in full, says:

“Major”: These are Chernukhin folks who shot down the plane. From the Chernukhin check point. Those cossacks who are based in Chernukhino.

“Major”: The plane fell apart in the air. In the area of Petropavlovskaya mine. The first “200” (code word for dead person). We have found the first “200”. A Civilian.

“Greek”: Well, what do you have there?

“Major”: In short, it was 100 percent a passenger (civilian) aircraft.

“Greek”: Are many people there?

“Major”: Holy sh__t! The debris fell right into the yards (of homes).

“Greek”: What kind of aircraft?

“Major”: I haven’t ascertained this. I haven’t been to the main sight. I am only surveying the scene where the first bodies fell. There are the remains of internal brackets, seats and bodies.

“Greek”: Is there anything left of the weapon?

“Greek”: Are there documents?

“Major”: Yes, of one Indonesian student. From a university in Thompson.

In fact, as Facebook has shown us, sometimes some systems take note of what you say even before you say it!

So, while the DNR was quick to delete those posts, it was still a bit like closing the barn door after the horse had already gotten out, as that cat was already out of the bag {and any other animal metaphors you like}.

You can read the full transcripts of all of the relevant recordings at the [Page no longer available – we have linked to the archive.org version instead].

Google Maps Street View Leads to Divorce
Stop Using Internet Explorer Immediately, Warns Homeland Security
What the new U.S. - Cuban Relationship Means for Cuba and the Internet
Research Says that Instagram Leads Teen Girls to Feel Bad about Their Bodies and that Facebook Knows...
All the Facts and Full Text of United Airlines Apology as Removal Video Goes Viral around the World
FBI Urges 2022 China Olympics Athletes to Leave Phones at Home and Use Temporary 'Burner' Phones (In...
What Exactly is the "Right to be Forgotten"? Explanation and Full Text of Decision
Wondering what the Heck LGBTTIQQ2SA Stand For? Here's What it Means
Share the knowledge

Number of people who have enjoyed this article: 2,779