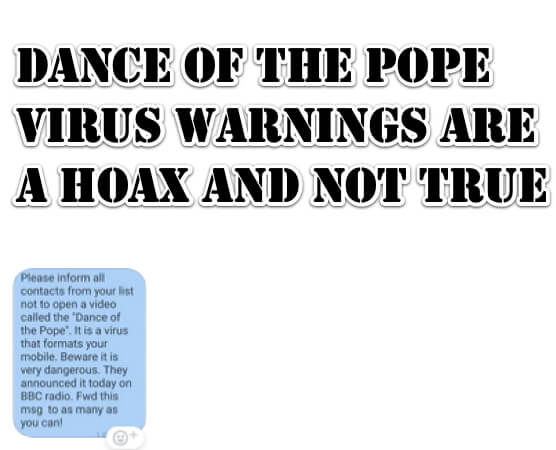 “Please inform all contacts from your list not to open a video called ‘Dance of the Pope’,” says the warning being forwarded to countless people on Facebook and elsewhere. But the dancing Pope warning is a hoax.

In full, the warning being bandied about Facebook says “Please inform all contacts from your list not to open a video called ‘Dane of the Pope’. It is a virus that formats your mobile. Beware it is very dangerous. They announced it today on BBC radio. Fwd this message to as many as you can!”


This is, however, simply a recycling of a hoax from several years ago, warning of the same thing (although during 2015 it was also called the “Dance of Hillary”, a reference to 2016 presidential candidate Hillary Clinton). 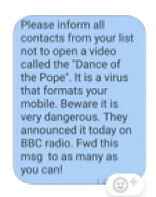 As Snopes points out, even as far back as 2015, the fake warnings were claiming that it had been announced on the BBC “today”, although not a single person actually claimed that they had heard it.

Says Snopes, “We found no information suggesting the Dance of the Pope virus warning was anything but a rumor. No radio stations were linked to the purported announcement; no news outlets reported the story; none of the antivirus companies had heard of it; and, most tellingly, no one appeared to have experienced the virus on his own device. If the virus were real, many users would have encountered and unwittingly opened the attachment despite the circulating warning by now.”

Of course, Facebook is a place that is ripe for spreading hoaxes. Most of them rely on the fact that people want to do good, and be helpful, and so want to help their friends by warning them about possible dangers. Witness, for example, the Talking Angela hoax, which told people on Facebook “I cant even in words say what I just found out.. I am SHOCKED and want to tell and let my friends and family be made aware so they can make sure their children are safe!!! Angelica stayed home from school today and thank GOD she did. Because she was on her ipod playing a game called talking angela, which is similar to talking tom, anyway as she is sitting next to me this interactive cat says to her hi angelica where is your brother?… So please if your KIDS use this app please shut it down. Because SOME KIDS told them the name of the school they went to and is now on red alert at the school, and please PASS this on to ALL your friends.”

Note that last line: “…and please pass this on to all your friends.”

That is the hallmark of a hoax. You can be pretty certain that if you receive a message on Facebook (or anywhere, really) that includes “please pass this on to all your friends” or, as with the current Dance of the Pope “Fwd this message to as many as you can”, that forwarding it on is the last thing that you should do.

As to what the perpetrators of the hoax get out of having their message spread far and wide? Well, while it’s not entirely clear, one can assume that, at very least, it lets those hoaxsters know who is most likely to share information – fake news, if you will – without first fact-checking it. So, don’t be one of those people.