That lawsuit against Craigslist was dismissed, and, testifying at a recent Federal hearing on child sex trafficking, William Powell, Craigslist’s Director of Customer Service and Law Enforcement Relations, said that “no other venue has adopted these best practices, and in fact very few venues have adopted more than one of these measures. Indeed, Craigslist has been one of the few bright spots and success stories in the critical fight against trafficking and child exploitation.”

People posting to the “Adult Services” section of Craigslist were met with this warning, outlining the terms of service by which they were required to abide:

1. “Adult Services,” like all categories on craigslist, may be used only for advertising LEGAL services.
When using craigslist, you agree to abide by the craigslist Terms of Use, which forbid posting, emailing, or otherwise making available content that is unlawful, obscene, or which advertises illegal services.
2. Do NOT suggest or imply an exchange of sexual favors for money – ads that do so are subject to removal without refund.
This prohibition includes use of any and all code words such as ‘greek’ or ‘cum’ or ‘bbbj’ or ‘lollipop’ or ‘head nurse’.
3. Do NOT attempt to avoid detection of forbidden language by using spelling variations or text in images – ads that do so are subject to removal without refund.
Examples of spelling variations include ‘gr33k’, ‘kumm’, ‘beejay’, ‘p*ssy’, ”, or ‘lolliez’.
4. Do NOT include obscene images with your posting – ads containing obscene images are subject to removal without refund.
If you’re not sure whether or not a particular image is obscene, do not post it.

Ads in violation of our Terms of Use or these guidelines are subject to removal without refund.

craigslist may supply information about your identity to law enforcement officers in response to legal subpoena.

However, recently Craigslist has been the focus of both a news sting in which CNN reporter Amber Lyon posted an ad posing as a prostitute (receiving 15 responses in a three hour period), and an ad taken out in the Washington Post, purporting to be an open letter from two young women who claimed to have been pimped out as sex slaves on Craigslist (full text below).

But only in the United States. 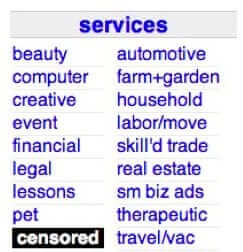 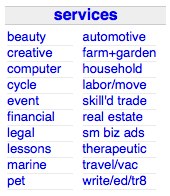 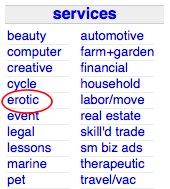 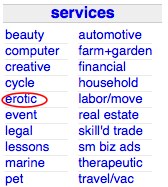 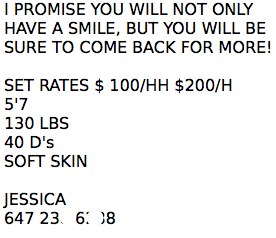 Here is the letter, addressed to Craigslist CEO Jim Buckmaster and founder Craig Newmark, from the 17 Attorneys General:

We are writing to request that you immediately take down the Adult Services portion of craigslist.

The increasingly sharp public criticism of craigslist’s Adult Services section reflects a growing recognition that ads for prostitution — including ads trafficking children — are rampant on it. In our view, the company should take immediate action to end the misery for the women and children who may be exploited and victimized by these ads. Because craigslist cannot, or will not, adequately screen these ads, it should stop accepting them altogether and shut down the Adult Services section.

In July 2010, two girls who said that they were trafficked for sex through craigslist wrote an “open letter” to your company {Ed. Note: Full text of that ‘open letter’ is below, although we found it first dated ‘May 19, 2010’, not July} in which they pleaded with you to eliminate the Adult Services section. Their poignant account told a horrific story of brutalization and assault suffered not just by them, but also by untold numbers of other children.

Ms. Lyon then confronted Mr. Newmark with an actual advertisement found on craigslist depicting a young woman in highly suggestive attire and clearly listing hourly rates. She then asked Mr. Newmark pointedly what services he thought the ad was selling.

Regrettably, Ms. Lyon’s question was met first with silence, then with misdirection. In fact, when Ms. Lyon told Mr. Newmark that some child advocates have dubbed craigslist “the Wal-Mart of child sex trafficking,” he chose to walk away. These reports and others show that that craigslist’s imagined utopia, where every Adult Services advertisement is harmless until proven otherwise, is a fallacy.

In your recent blog posts and public statements, including the CNN interview, you imply that victims, law enforcement officials and children’s advocates may be at least partially to blame for these incidents because they have not provided craigslist with police reports, ad copy or links documenting these heinous crimes. This variant of “blame the victim” is deeply troubling. It also disregards, perhaps intentionally, two fundamental facts. First, craigslist is the only player in the sex industry who is in a position to stop these ads before they are published. Second, once an ad goes live on the site, it is a virtual certainty that someone will be victimized. Yes, the perpetrators may eventually be apprehended and brought to justice, but the victim, assuming she survives, will carry the scars for life. No amount of after-the fact documentation will erase that enduring harm. Equally important, your much-touted “manual review” of Adult Services ads has failed to yield any discernable reduction in obvious solicitations.

We recognize that craigslist may lose the considerable revenue generated by the Adult Services ads. No amount of money, however, can justify the scourge of illegal prostitution, and the suffering of the women and children who will continue to be victimized, in the market and trafficking provided by craigslist.

We sincerely hope craigslist will finally hear the voices of the victims, women and children, who plead with you to make this important change. We, too, call on craigslist to listen and respond now by shutting down the Adult Services section of its website. Such action is the right thing to do to protect innocent woman and children.

The above letter was signed by:

Here is the open letter written by “M.C.” and “A.K.”, who are purportedly two women who were trafficked for sex on Craigslist from a young age. These letters appeared as advertisements in the Washington Post and the SF Chronical:

Although we have not met, we are certain you would not want what happened to us or to thousands of girls like us to ever happen again.

Craig, I am AK. In 2009, I met a man twice my age who pretended to be my boyfriend, and my life as an average girl — looking forward to college, doing my chores, and hanging out with my friends — ended. This “boyfriend” soon revealed he was a pimp. He put my picture on Craigslist, and I was sold for sex by the hour at truck stops and cheap motels, 10 hours with 10 different men every night. This became my life.

Men answered the Craigslist advertisements and paid to rape me. The $30,000 he pocketed each month was facilitated by Craigslist 300 times. I personally know of over 20 girls who were trafficked through Craigslist. Like me, they were taken from city to city, each time sold on a different Craigslist site — Philadelphia, Dallas, Milwaukee, Washington, D.C. My phone would ring, and soon men would line up in the parking lot. One Craigslist caller viciously brutalized me, threatening to dump my body in a river. Miraculously, I survived.

Craig, I am MC. I was first forced into prostitution when I was 11 years old by a 28-year-old man. I am not an exception. The man who trafficked me sold so many girls my age, his house was called “Daddy Day Care.” All day, other girls and I sat with our laptops, posting pictures and answering ads on Craigslist. He made $1,500 a night selling my body, dragging me to Los Angeles, Houston, Little Rock — and one trip to Las Vegas in the trunk of a car.

I am 17 now, and my childhood memories aren’t of my family, going to middle school, or dancing at the prom. They are of making my own arrangements on Craigslist to be sold for sex, and answering as many ads as possible for fear of beatings and ice water baths.

Craig, we write this letter so you will know from our personal experiences how Craigslist makes horrific acts like this so easy to carry out, and the men who arrange them very rich.

Craig, we know you oppose trafficking and exploitation. But right now, Craigslist is the choice of traffickers because it’s so well known and there are rarely consequences to using it for these illegal acts. We’ve heard that the Adult Services section of Craigslist brings in $36 million a year by charging for these ads. These profits are made at the expense of girls like us, who are lured, kidnapped, and forced to feed the increasing demand for child rape. New traffickers are putting up ads every day, because they know it’s less risky and more profitable to sell girls on Craigslist than to deal drugs.

Please, Craig, close down the Adult Services section. Saving even one child is worth it. It could have been us.

Number of people who have enjoyed this article: 8,355