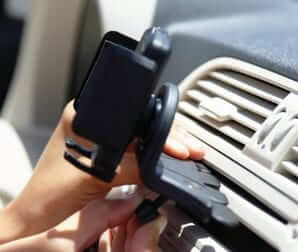 We got such a great response to our article on the iPhone holder for cars that uses the cassette deck, that we thought we’d write an article about a similar device that holds your phone using your CD slot in your car. We especially figured we should do that because we got a couple of questions asking whether there was a smartphone holder that uses your car’s CD player. There is.

In fact, depending on what sort of phone you have, you have several options, however they all work in roughly the same way. You insert the back end of the device in the slot of your car’s CD player, and then your phone clamps into the phone holder at the front.

There are basically two types of CD player phone holders – those which hold your phone by clasping it, and those that hold your phone by magnets (and so require you to attach a thin piece of metal to the back of your phone). We are not fans of the latter, and so we will discuss only the former, but if you prefer to have strong magnets around your electronics, you can see some CD slot cell phone holders using magnets on Amazon

So, they are, in no particular order: 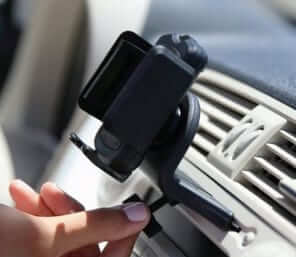 If you have a big, heavy phone or so-called “phablet” this may not be the holder for you. While overall the Mountek gets great reviews, those that were less pleased with the Mountek were from people with admittedly large, heavy phones or small tablets. 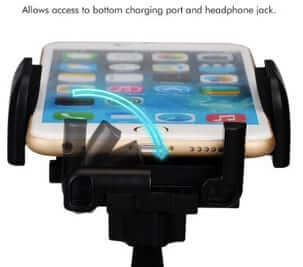 We like that the Mpow has a cool flippy arm on the bottom to accomodate any charger and bottom-located headphone jacks – on the other hand, that seems like it could be a point of failure, and we do like the stability of there always being two arms at the bottom of the phone anyways.

For the most part, these two CD slot cell phone holder mounts all work in the same way, and whichever one you choose should be perfectly serviceable.

Check Out These 5 Apps Supporting Mental Health During the Coronavirus Pandemic
How to Make and Answer Calls on Your iPhone from Your Mac or iPad
Whatever Happened to Activity Monitor in Apple Mail? And How to Get it Back
Digital Driver's License Coming to Some States
FCC Publishing Weekly List of Telemarketer and Robocall Numbers
How to Remove that Guest User Account from Your Mac or Macbook
What to Do When Your Personal Hotspot has Disappeared from Your iPhone
Apple Maps Finds Nessie the Loch Ness Monster
Share the knowledge