California Governor Jerry Brown vetoed a bill on Sunday that would have required a search warrant in order to obtain location-based personal information obtained through cell towers from mobile devices such as cell phones and tablets, and also GPS systems. The veto came with the message that Brown felt that information based on a user’s location is important to the processes needed by law enforcement.

Brown’s veto message was short and to the point: 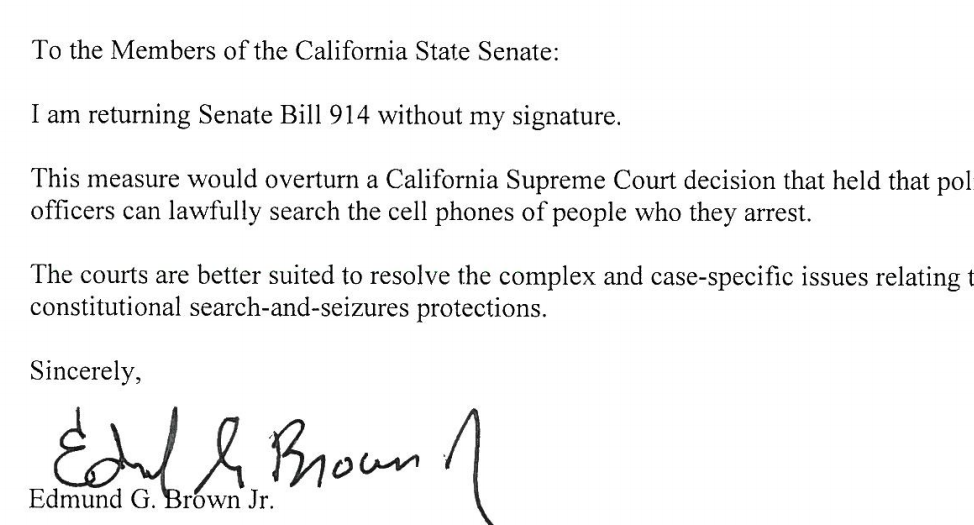 The bill was introduced by State Senator Mark Leno (D-San Francisco) who maintains that the bill is in line with the U.S. Supreme Court’s ruling that the installation of a Global Positioning System device on a suspect’s car without a warrant by police is unconstitutional. Said Leno, “California consumers are rightfully concerned about mobile privacy and the rate at which their location information is being shared with law enforcement.”

The bill would have been the answer to citizens who have privacy concerns regarding what kind of information could be collected via their mobile devices. While location-based technology has become vital to many for purposes of driving directions, connecting with friends and locals, and receiving personalized news and current events, many have been concerned as to the growing, Big Brother-like possibilities that could grow from the government having the technology to track the move of anyone with a mobile device.

The bill received approval from both the American Civil Liberties Union and the Electronic Frontier Foundation (EFF), with the EFF writing:

“We can’t have police making decisions about who to track without any oversight – yet that’s exactly what’s happening. New data from the ACLU shows that law enforcement agencies across the country are collecting location data without a warrant or any court approval. Maybe these investigations are legitimate, or maybe in some cases police officers just have a bone to pick with a local resident. We can’t be sure that police aren’t abusing location tracking unless we require them to get a warrant. That’s why the bill also includes a reporting requirement, so we can keep track of who is getting this information and how often it’s being requested.”

Regardless of whether or not law enforcement uses the information for good or evil, there is no doubt that this lack of user-protection is going to leave many mobile device users feeling uneasy and vulnerable. With California setting precedence, how long until other states start following suit?

How to Opt Out of Interest Based Ads and Behavioral Advertising
Dance of the Pope Virus Warnings are a Hoax and Not True
Is OK Cupid Selling Your Answers to Their Questions?
Tesla: Data Security Hell on Wheels?
Mark Zuckerberg Announces that Facebook Will Now Be All About Privacy and Unified Messaging Across W...
Social Media Uses this Trick to Extract Your Personal Data from You. DETOUR Law Would Make Using th...
Google Adds Everyone to Shared Endorsement Ads - How to Opt Out
Does Microsoft Windows 10 Technical Preview Really Include a Key-Logger? Yes