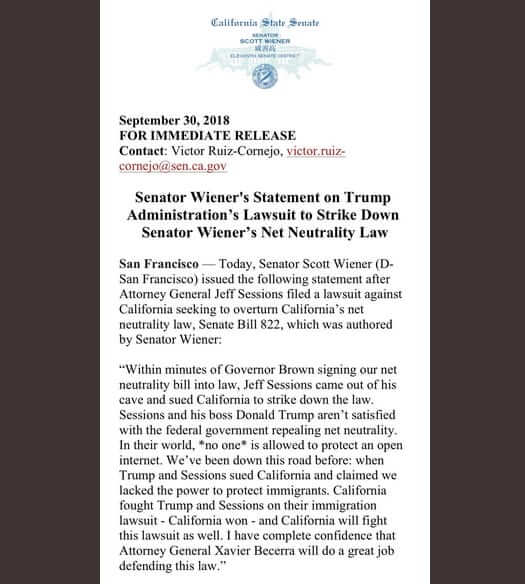 California governor Jerry Brown signed a new California net neutrality law into law yesterday (yes, on a Sunday, September 30th), and on that same Sunday, hours later, the Department of Justice filed a lawsuit against California’s new net neutrality law, saying that it “unlawfully imposes burdens on the Federal Government’s deregulatory approach to the Internet.”

In mid-December of 2017, FCC Chairman Ajit Pai made good on the administration’s word, and killed (repealed) the net neutrality rules, codified in the Open Internet Order (OIO), that had been in place for about three years. You can read more about that here.

In large part because of the Feds reversing of the OIO and effectively killing any mandated net neutrality, California passed their own net neutrality law, spearheaded by California Senator Scott Wiener. That is the law that Governor Brown signed into law yesterday, and that the DOJ is suing to have overturned.

Within minutes of Governor Brown signing our net neutrality bill into law, Jeff Sessions came out of his cave and sued California to strike down the law. Sessions and his boss Donalt Trump aren’t satisfied with the federal government repealing net neutrality. In their world, *no one* {Ed. note: the asterisks are his, not ours} is allowed to protect an open internet. We’ve been down this road before: when Trump and Sessions sued California and claimed we lacked the power to protect immigrants. California fought Trump and Sessions on their immigration lawsuit – California won – and California will fight this lawsuit as well. I have complete confidence that Attorney General Xavier Becerra will do a great job defending this law.

Of course, the DOJ is equally confident, claiming that not only is the California law illegal, but that it is unnecessary, and that it hurts consumers.

In 1996, a bipartisan Congress decided that the Internet should remain “unfettered by Federal or State regulation.” Since 2002, the FCC has accordingly classified broadband Internet access as an “information service” that is exempt from public-utility regulations. The FCC briefly departed from this classification in a 2015 Order, which imposed restrictions on the freedom of the Internet. In 2018, the FCC returned to its prior light-touch framework, ensuring that Internet access services are free and guided by a uniform set of federal rules, rather than by a patchwork of state and local regulations. The United States concluded that California, through Senate Bill 822, is attempting to subvert the Federal Government’s deregulatory approach by imposing burdensome state regulations on the free Internet, which is unlawful and anti-consumer.

“Under the Constitution, states do not regulate interstate commerce—the federal government does. Once again the California legislature has enacted an extreme and illegal state law attempting to frustrate federal policy. The Justice Department should not have to spend valuable time and resources to file this suit today, but we have a duty to defend the prerogatives of the federal government and protect our Constitutional order. We will do so with vigor. We are confident that we will prevail in this case—because the facts are on our side.”

“I’m pleased the Department of Justice has filed this suit. The Internet is inherently an interstate information service. As such, only the federal government can set policy in this area. And the U.S. Court of Appeals for the Eighth Circuit recently reaffirmed that state regulation of information services is preempted by federal law.

“Not only is California’s Internet regulation law illegal, it also hurts consumers. The law prohibits many free-data plans, which allow consumers to stream video, music, and the like exempt from any data limits. They have proven enormously popular in the marketplace, especially among lower-income Americans. But notwithstanding the consumer benefits, this state law bans them.

“The Internet is free and open today, and it will continue to be under the light-touch protections of the FCC’s Restoring Internet Freedom Order. I look forward to working with my colleagues and the Department of Justice to ensure the Internet remains ‘unfettered by Federal or State regulation,’ as federal law requires, and the domain of engineers, entrepreneurs, and technologists, not lawyers and bureaucrats.”

So, where do you stand on this? Are you in favor of California having their own net neutrality law, or do you agree with the Feds that requiring network neutrality is unnecessary, and may hurt consumers? Or, could you not care less either way?

Number of people who have enjoyed this article: 591