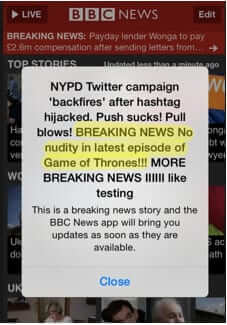 The full text of the errant alert was: 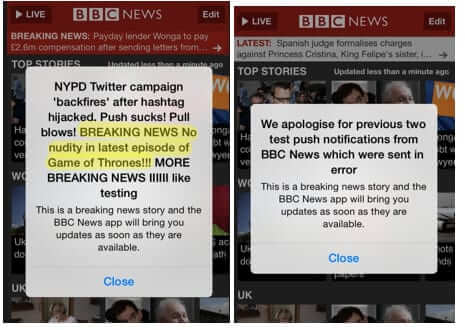 Of course, Game of Thrones is known for its frequent nudity and sex scenes. As Wikipedia says of Game of Thrones, “Despite its otherwise enthusiastic reception by critics, Game of Thrones has been criticized for the amount of female nudity, violence and torture, and sexual violence against women it depicts, and for how it depicts these themes. The amount of sex and nudity in the series, especially in scenes that are incidental to the plot, was the focus of much of the criticism aimed at the series in its first and second season. Actor Stephen Dillane, who portrays Stannis Baratheon, likened the series’s frequent explicit scenes to “German porn from the 1970s.”

So, an episode of Game of Thrones that had no nudity would be newsworthy, at least in certain news circles.

As soon as the mock breaking news alert was sent out, comments and concerns started flooding in.

Noted security expert Graham Cluley immediately posted, wondering whether the BBC had in some part been hacked, saying that “Chances are that the app itself has not been hacked, but it’s possible pranksters have managed to exploit the way in which the BBC feeds in breaking news alerts to push them out to the app’s userbase. Nevertheless, it’s embarrassing and it’s easy to imagine how such a flaw could be exploited to scare into making bad decisions.”

However, Cluley immediately went on to say that “Another real possibility is that someone inside the BBC was testing the system and, umm, didn’t realise their message would be seen by the outside world.”

And indeed, that was exactly what had happened, as a tweet from BBC News revealed, saying “We apologise for previous two test push notifications which were sent in error to BBC News app subscribers.”

Explained a spokesperson for BBC News, in an interview with the UK’s Mirror, “We’ve been in the process of testing new functionality for our Apps and a test message was sent in error this morning,” adding that “We apologise to our App users who were unnecessarily interrupted with the alert.”

The staffer who sent out the test has not been named, but if we could, we’d give them props for clearly having a sense of humour.

Apple Maps Finds Nessie the Loch Ness Monster
In Ultimate Use of Crowdsourcing UN Recruits Digital First Responder Volunteers with 'Verified' Proj...
Clicking on a Text Message Link Can Be Lethal
Uber Debuts Self-Driving Uber Cars
Largest Set of Sky Survey Astronomical Data in History Made Available Online
Police Officers Launch Disinformation Campaign on Waze Traffic App
Play a Game, Learn Something, and Help End World Hunger at the Same Time, All Without Leaving Your ...
Get a Jump Start on Your New Years Resolution to Get in Shape with the Fitness Buddy Exercise App
Share the knowledge

Number of people who have enjoyed this article: 2,090