Mayor Michael Bloomberg has called off the New York City Marathon after a growing backlash mounted on the marathon’s Facebook page. Now he is getting new backlash from the marathon runners who either think it could have at least been called off sooner, or should just go ahead regardless. For the latter, it is only causing more growing tension from those who think the out-of-towners are being insensitive. 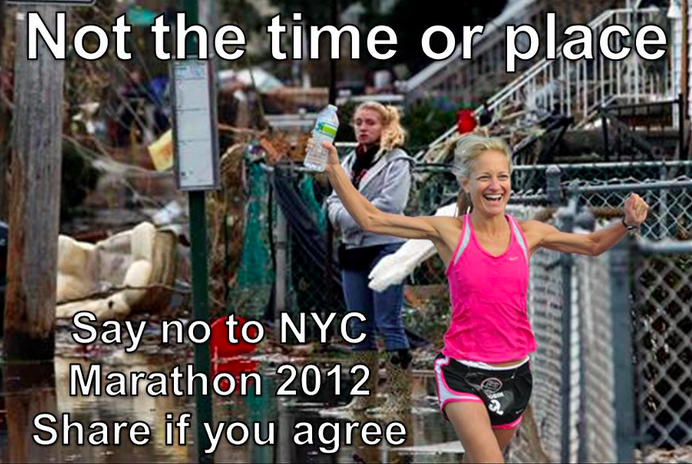 “We are dying here. You are running on our graves.” is just one of the many comments on the Facebook page of the ING New York City Marathon’s Facebook page. Despite the devastation that is left behind in the wake of Hurricane Sandy, marathon officials were determined to press forward with the race.

In a thinly veiled strategy, marathon officials had dubbed the marathon “Race to Recover,” and turned it around as some sort of ray of light amidst the darkness that hangs over the city, pledging some of the funds raised by the marathon towards helping relief efforts. In an interview with TODAY’s Matt Lauer, CEO and president of New York Road Runners, the group that organizes the New York City marathon, Mary Wittenberg, said that they hope that moving forward with the race will “bring the city together and help the world unite to really support this relief effort.”

But Lauer did not let Wittenberg off of the hook quite so easily:

Visit NBCNews.com for breaking news, world news, and news about the economy

Before too long, a Facebook page dedicated to canceling the race was erected.

While Mayor Bloomberg was at the helm of the shipwreck of a decision to move forward with the marathon, many state officials do not agree with his decision to let the marathon move forward. Says State Senator Liz Krueger, “I do appreciate that the marathon brings in money to local business, but let’s be honest, it’s a huge draw on our resources.”

For the record, the marathon was set to start on Staten Island, which currently accounts for half of all of the deaths that occurred as a result to the storm.

The initial decision to continue with the marathon has not sat well with New Yorkers, to say the very least, with outraged New York citizens and supporters taking to Facebook with comments of anger and disappointment:

“Closing down the most important artery into and out of Staten Island for supplies and refugees for 9 hours so that people can go for a fun run seem like the height of hubris to me.”

“CANCEL IT!! People are dying, bodies still being found. For God’s sake…cancel it!”

“To divert the EMS, Fire, and Police and volunteers, that are needed to deliver aid to so many, and have them direct traffic and crowd control for this event is a slap in the face of those suffering.”

“Why don’t the runners come to the city, stay in shelters, and volunteer for a few days? They could run supplies up to seniors & handicapped people who don’t have working elevators in their buildings!”

“I am a NYC 911 paramedic. I have been at work since Saturday and was not able to go home yet since my car was flooded by this storm.” She went on to say, “Just because north of 40th street looks as if nothing happened, downtown looks as if a nuclear bomb went off and only left standing infrastructure. To have this marathon is selfish, and dangerous. Your EMS/Fire/Police personnel are beyond exhausted, mentally and physically.”

Luckily, citizens of New York are still looking out for one another. Two Staten Island hotel owners, Amit Gandhi of a Holiday Inn Express, and Richard Nicotra of the Hilton Garden Inn, have both stated that they refuse to kick out storm refugees to accomodate the marathon runners, with Gandhi stating, “Our main priority here is to help people in the Staten Island community who have lost their homes to the storm.”

Nicotra’s sentiment was similar, “How do I tell people that have no place to go, that have no home, that have no heat, that you have to leave because I need to make room for somebody that wants to run the marathon? I can’t do that.”

We applaude Mayor Bloomberg for putting New York citizens ahead of the race.

U.S. Government in Talks with Google, Facebook, to Track Location of Where Individuals with Coronavi...
Facebook Admits Conducting Research Experiments with Users Emotions: Read How
How To Sell on Social Media by Turning Followers Into Customers
Millions of Facebook Passwords and Other Passwords Stolen in Massive Breach by Pony Botnet Controlle...
How to Report Scammy Facebook Ads on Facebook
How to Get Back the 'Most Recent' Stories View on Your Facebook Newsfeed Timeline
The Differences Between Different Types of Facebook Pages
What to Do When Your Phone Number is Associated with Someone Else's Facebook Account

First Day Hands-On Review and Impressions with the iPad Mini

Why the Newly Improved Google Voice Search App Beats Siri Hands Down (and You Can Use it on Your iPhone!)