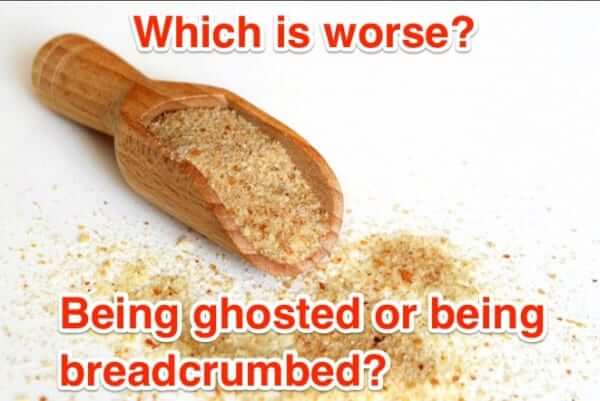 Which do you think is worse: being breadcrumbed or being ghosted? We have previously written about ghosting, which is when someone with whom you have had a date, or have been texting or emailing (or, heaven forbid, talking with on the phone), disappears without even the courtesy of telling you that they have decided that they are not interested, or are perhaps interested in or seeing someone else. Breadcrumbing, on the other hand, is when they don’t disappear, even though they are no longer genuinely interested in you (if they ever were).

Instead, they lead you on.

Some feel that even the act of just sporadically ‘liking’ a Facebook or Instagram post – just enough to let you know they are there without having to actually engage you – is also breadcrumbing, although we think that is a greyer area.

But flirting with you, to keep you interested, without intention of follow-through, that’s much less grey.

The Urban Dictionary defines breadcrumbing as “When a guy or girl gives someone just enough attention to keep their hope of a relationship alive,” and Bustle says that it is when someone “gives you enough attention that you think not all hope is lost.”

PopSugar has come up with a dictionary-style definition of breadcrumbing all their own:

Breadcrumbing (noun): The act of sporadically sending flirtatious yet noncommittal text messages (i.e., “breadcrumbs”) to someone at random times in order to keep up their hopes that a relationship may form in the future although there are no actual intentions of dating.

And this rude trend is not limited to the just U.S.. For example, the UK’s Sun says that “Just like the name suggests, the dating sin involves leaving a trail of “breadcrumbs” for your unsuspecting victim to follow,” explaining that “the cheeky messages don’t actually result in a romantic date.”

In Ireland the Independent describes breadcrumbers as “people who contact you intermittently in order to keep you interested, but are stubbornly vague on whether a relationship will ever blossom. Then they vanish, and the cycle starts again. They keep you in limbo, just in case someone better comes along.”

Wherever it is happening, some experts say that breadcrumbing is by far the worse practice, as between ghosting and breadcrumbing, at least in terms of the intent of the breadcrumber.

That, however, is from the perspective of the perpetrator’s intentions, or lack thereof.

But what about the ones who are on the receiving end of being breadcrumbed? What do you think?

Would you rather be ghosted, or breadcrumbed?

Is OK Cupid Selling Your Answers to Their Questions?
The Truth Behind New York's Ban on Tiger Selfies
Our Take on Whether Stir the New Dating App for Single Parents is Any Good
OKCupid Admits to Experiments with Users
How to Unsubscribe from Match.com When You Signed Up through the Match App via the App Store
How to Cancel a Bumble Boost (Premium) Account
Matchr - The New Dating Site Profiles Card Game
New Online Dating Scam - I'm Contacting You for a Friend
Share the knowledge

6 thoughts on “Breadcrumbing – Worse than Ghosting?”

Number of people who have enjoyed this article: 1,045