But now they seem to have truly hit bottom and, in fact, are looking at their options to somehow bring Blackberry back from the precipice. It seems that no option is off the table, including selling the operation, a joint venture, or taking it private (which would make it easier to make changes).

In the meantime, Prem Watsa, CEO of Blackberry’s majority shareholder Fairfax Financial, is stepping down from the board, due to a potential conflict of interest, and Blackberry has put together a committee to explore their options. “I continue to be a strong supporter of the company, the board and management as they move forward during this process,” said Watsa. 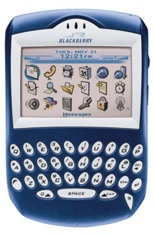 But not everyone is sounding so on board. Said BMO Capital Markets analyst Tim Long, “While a change in structure could result in a higher stock price in the near term, we do not envision any changes that would help BlackBerry reverse the significant smartphone share loss or rapid decline in service revenues.”

Warrants for Google Account Info on All Mobile Devices in a Given Area Now Being Served on and Respo...
You Can Own a Lamborghini for Just $6000 - a Lamborghini Cell Phone that is
The NSA is Telling Mobile Users to Turn Off Find My Phone, WiFi, and Bluetooth. Here's Why
Wireless Charging is Coming and It’s Going to be Big
How to Make and Answer Calls on Your iPhone from Your Mac or iPad
The Pros and Cons of Using the Chrome Password Manager
Phone Number Reputation ("PhoneID Score") Being Created Based on Two-Factor Authentication
Slow Internet Speed and What You Can Do About It
Share the knowledge

Number of people who have enjoyed this article: 1,622