Blackberry CEO Thorsten Heins is branching out. No longer content to be just the CEO of one of the most improbably failingest tech companies, he is now a prognosticator (that’s a fancy word for someone who predicts the future). According to Heins, in five years there will no longer be any reason to have a tablet computer.

This may come as a surprise to shareholders, as Heins said just a few months ago, of the Blackberry PlayBook tablet, “We want to provide a value proposition that is not just hardware, but software, too. What we’ll be doing in the tablet space is looking for specific services on top of the tablet — financial, healthcare verticals. We are still exploring various use cases for it.” 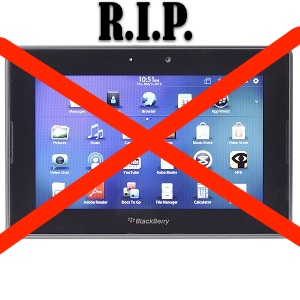 We have always thought that one of the Blackberry’s downfalls was that it positioned itself perhaps a bit too strongly as a primarily corporate device. Which made their naming the tablet the “PlayBook” all the more curious.

(Of course, we’ve also always thought that the Sidekick’s downfall was that it positioned itself too strongly as a device for hip-hop mad twenty-somethings, when in fact the Sidekick had perhaps one of the best OSs on the market, for a time, and was fabulous for business as well.)

Anyways, back to Heins’ prediction. In full, he said that “In five years I don’t think there’ll be a reason to have a tablet anymore. Maybe a big screen in your workspace, but not a tablet as such. Tablets themselves are not a good business model.”

What do you think? Do you envision ever giving up your tablet? Do you think that tablets will go the way of the dinosaur?

We asked our iPad Mini, which replied, in true Twain style, that reports of its death were greatly exaggerated.

Multi-factor Authentication and Why You Need It
Why the Subject Line is the Most Important Part of Your Email
How to Use Your iPad or Android Tablet as a Second Display Monitor Screen
Our Pick for Best, Must-Have iPad, iPhone and Android Game App: Draw Something
Share the knowledge

One thought on “Blackberry CEO Predicts the Death of Tablets.”

Number of people who have enjoyed this article: 2,265